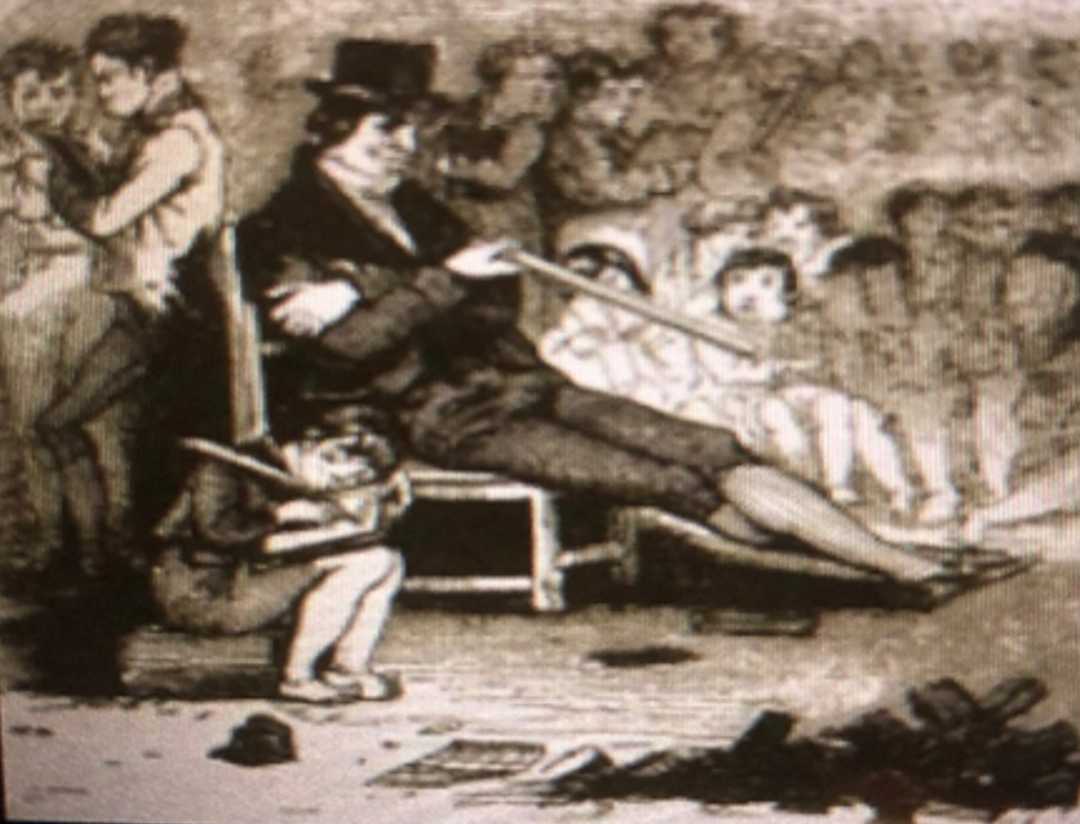 Up until the 1680’s, Bardic schools were in existence and instructed in literature, history and Brehon law through the native Gaelic tongue. They provided what amounted to a University education and this proud tradition produced an abundance of poets, historians and Brehons.

Subsequently, the Hedge School came into being in response to the 1690 Penal Laws that Britain imposed on Ireland, in an attempt to suppress thenative people. One of the laws declared schools illegal, but little did Britain realise that 9,000 hedge schools and 40,000 scholars would emerge by defying the ban.

As their name suggests, the nomadic teacher and his pupils met wherever they could find shelter, and an informal education was offered of varying quality. Initially, they clearly weren’t seen as too much of a threat, as the British chose to ignore them. Joe Power’s article entitled ‘Education in Clare’states that “some of the best-known teachers of this era included John Floyd of Tulla, Stephen O’ Halloran and Tomás O’ Míocháin of Quin…” 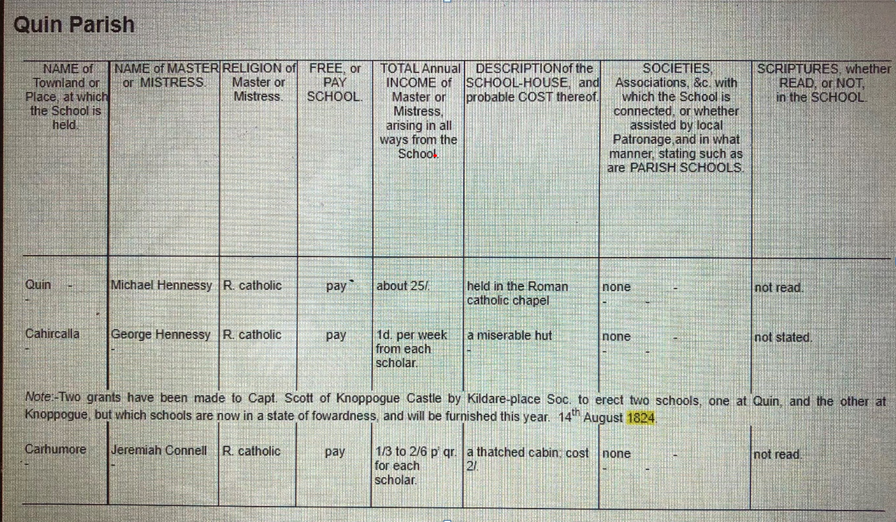 An 1824 document informs us of the eight hedge school teachers in our parish, out of a total of 312 in the county:

It must be acknowledged how the teacher was driven to teach in secret, when weather permitted, typically outdoors in a remote spot away from prying eyes. Teacher and pupil would sit upon the grass, whilst another student was on ‘lookout’ to warn of strangers approaching. If a hedge school was ‘discovered’ – the teacher was often imprisoned or fined. Of course, the informer could always be relied on and was rewarded in helping to convict the teacher.

An anonymous writer in 1776 relates how a poor ragged boy was “well acquainted with the best Latin poets”. Later, when the laws against education eased, school was taught in cabins or any usable building.

The schools were quite strict, and from an 1812 ‘Report of Schools’ surveyed we learn; ‘Instruction, except in a few instances, extends no further than reading, writing and the common rules of arithmetic’. The price paid for the tuition was on average ten shillings per annum for Reading, seventeen shillings and four pence if writing was added and one pound six shillings if arithmetic was part of the tuition.It was also common that teachers were often paid with turf, butter, eggs, home-cured meat, lodgings and a few pence per pupil. It was expected that ‘each scholar would bring two sods for the fire’. But the teacher often fulfilled another important role in the community as we learn from Hely Dutton’s accounts of travels in Co. Clare. He informs us how teachers often carried out legal transactions, dealing with bills, accounts, warrants and summons. This clearly added to their prestige in the locality. A diary entry from Dutton tells us of a master who wrote the following:

‘’7th Jan (1793) – Constant smart rain the whole day and most part of the night. Drew marriage articles between Thos. Woodc and Bridget Murphy, and got 8s. 1 1/2 d. for my trouble. The remainder of the 58th Regt. Marched this morning for —. Crouch gave me two pots of porter at my fireside. I wrote a letter for him to J.D. Maindue, M.D. Esq., Bloomsbury Square, London’.

As P.J. Dowling states in ‘The Hedge Schools of Ireland’, Life was increasingly difficult for men who endeavoured to maintain the independence of their schools after the establishment of the National Board of Education in 1832. The Board was a political response to the difficulties the British Empire had in controlling its closest colony. It was seen as a means to strengthen the link to the Empire. It was also a social response to the widespread poverty and quest for education in Ireland. The hedge school masters witnessed the passing of the old Hedge Schools, slowly giving way to the schools under the new Board. Parents were sending their children to them, because the fees were lower than in the Hedge Schools. Teachers took positions there as they were certain of a wage – it wasn’t as precarious as the life of a Hedge School múinteoir.

Padraic Colum in his poem, A Poor Scholar’, describes how the hedge school teacher felt with the demise of their profession,

‘My eyelids red and heavy are

With bending o’er the smouldering peat.

I know the Aeneid now by heart,

My Virgil read in cold and heat,

In loneliness and hunger smart.

And I know Homer too, I ween,

I teach these by the dim rush light,

In smoky cabins night and week.’