Taken from Clare Champion, Nov.2nd, 1940 and published in the first edition of the Quin – Clooney – Maghera Parish magazine 1987

A NEW PAROCHIAL HALL FOR QUIN

St. Fineen’s new Parochial Hall in Quin was blessed and opened on Sunday last in the presence of a distinguished gathering of people from the parishes of Quin and Clooney.  Built on the bank of the River Rine and in close proximity to the Catholic Church and the famous abbey of Quin, the new hall is a magnificent structure and is a lasting monument to the zeal and enthusiasm of the people of the united parishes and to the energy of their respected Parish Priest. Very Rev. Canon Vaughan.

As has already been stated in those col­umns, the erection of the Hall was only decided upon in the early part of the present year. A representative committee, under the chairmanship of Very Rev. Canon Vaughan, was formed at a meeting held on the first Sunday in March, and the following week saw the commencement of  the foundation of a

new building, which is second to none in Munster and a building which reflects the greatest credit upon all associated in any way with its erection. It is a credit to the parish and to the parishion­ers who erected it. Its actual cost is about £1,500, but the possible cost, including levelling, filling, labour, etc., is anything up to £3,500.

Very Rev. Canon Vaughan, at the opening cere­mony on Sunday, said there is not a penny of public money within its walls. This is further proof of the generosity, zeal and enthusiasm of the people of the parish, who provided about £2,000 worth of free labour.

The ceremony of blessing and opening the Hall took place after last Mass on Sunday. The day was exceptionally fine and 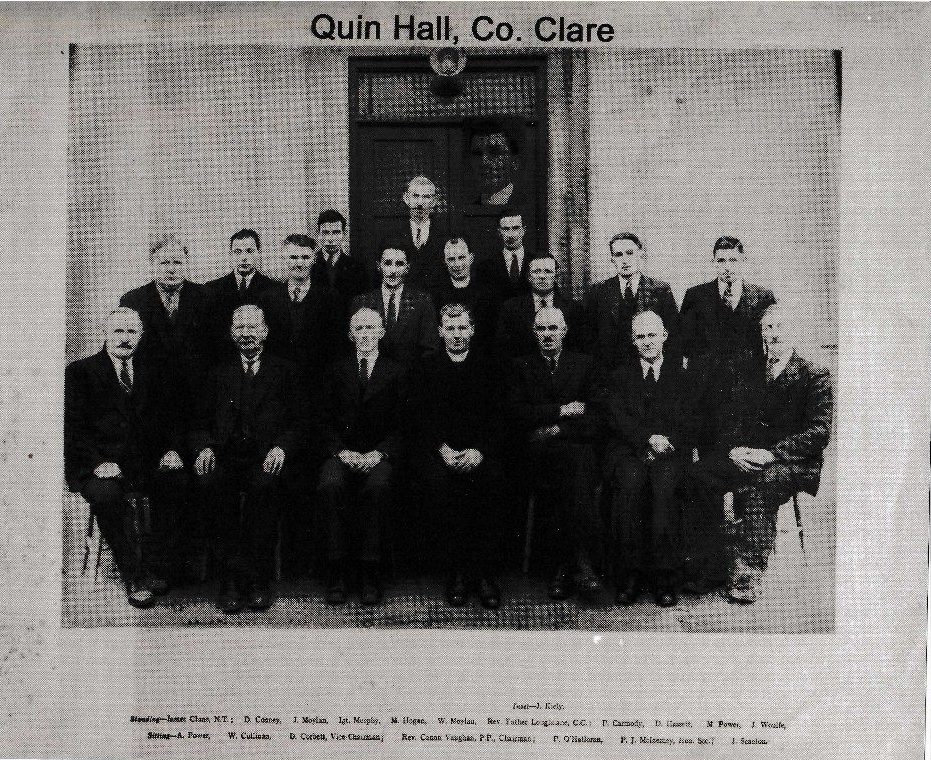 the large crowd assembled in front of the Hall, as Canon Vaughan addressed them, formed a very impressive sight. The approaches to the Hall were beautifully decorated with flags and bunting. Members of the Committee present included Canon Vaughan and Rev. P. Loughnane, C.C., were Messrs, Dan Corbett, Vice-Chairman; P. J. Mclnerney, hon. sec.; James Scanlan, John Kiely, P. F. O’Halloran, Daniel Hassett, James Clune, N.T.; Ambrose Power, Patrick Armstrong, Patrick Carmody, James Moylan, Michael Power, Michael Hogan, Michael Kelly, Thomas Fahy, Tim Clune, Stephen O’Dea, Wm. McNamara, Patrick Corbett. Thomas O’Loughlin, John
Reynolds, Brendan Kilmartin.
Very Rev. Canon Vaughan assisted by Father Loughnane, having blessed the Hall, addressed those assembled outside.
You have been asked here to-day, he said, to witness and assist at the opening of the new Parochial Hall. The Hall is named after St. Fineen – the Patron Saint of Quin – one of those lrish Saints of the past, of whose birthplace and parentage we know nothing, beyond the fact that the ruins of the old Church alongside this modern building, carry his name down the centuries thereby linking the old with the new and serving as a silent reminder of the ascetic and sacrificing spirit of a time when lrishmen became the glory and wonder of the world, following almost alone the footsteps of the Master.

The story of the Hall can be briefly told. A meeting of the Parishioners was held on the first Sunday in March. A Committee was appointed, and, on the following week, work commenced on the foundation of the new building. The work proceeded so regularly and quickly that by the end of March, the building was completed for all practical purposes. lt took only seven months – no mean achievement “in the piping times of peace” – and something more when we remember there is a world war, with all the inevitable curtailments of supplies and the difficulty of procuring materials, even of an inferior kind. We came through, however.
It is fortunate for lreland that such materials as cement and slate are now manufactured in this country. It is a pity that more attention is not given to afforestation, to the providing and proper seasoning of native timber to replace the foreign kind, at Ieast the woods for ordinary work, such as roofing, doors, etc. The lack of such, at the moment, may induce our Covernment to face up to this problem with a view to future contingencies.
To go on with the story. Plans were drawn at Mr. Richard Dowling’s office in Ennis. His able assistant, Mr. O’Leary, a young Architect, recently arrived in Ennis, took over the entire responsibility, supervised the lay-out, construction, and spared neither time nor patience in seeing to the erection, in fact, I might say he was almost

too particular in his desire to have every thing as near to perfection as it could be. On my own behalf, and on the Committee’s. I wish to offer him our best thanks for his services to us, and I might add, that if he gives, the same attention and intelligence in planning to other or greater works of this kind, his position as an Architect is guaranteed from this onwards.

The actual building was accomplished by local labour for the most part. Here at the outset. I must compliment and congratulate the Parishioners on their wonderful co-operation all through. From the very first day, right down to the end, it was only a question of asking a horse, or a car, or a man, or men, for that matter, and they came as requested.
The amount of free labour I could not properly assess. At no time during the seven months was there a day, that, on an average, 3 or 4 or even 5 men were not working on the site, and they are all the more deserving of praise when it is realised that it was the busiest time of the year – from Spring sowing to the end of the Harvest. I should also add that this free offer of labour was not confined to the district around, but we had outsiders from the parishes of Doora and Newmarket-on-Fergus.
To one and all – parishioners, and externs – I am deeply grateful, and the parish itself is grateful for their fine public spirit and for the generosity and enthusiasm which inspired all this voluntary effort.

I will not tire you by putting you the
question or discussing it aloud with myself: “What use is a Parochial Hall?” The fact that you came together as one body and built it, the fact that a Committee had the courage and perseverance to see it through, the fact that it has aroused a certain amount of public interest must surely be an index that such halls are a necessity in the lives of the people. I do not mean to assert that they will solve all or many of the problems that arise in our rural living. They are not meant to do so. If they do nothing else but bring people together, whether for a social entertainment or for recreational or educational or other purposes, they will help to break down prejudices and petty barriers, and I think it about time that a general demolition of that kind should take place in our rural districts.

I now declare the Hall open. It was built by the energy, co-operation and sacrifices of the people of the district of Quin. It actually cost about £1,500. Possible cost – including filling, levelling, edifice labour, anything up to £3,500.  There is not a penny of public money in its walls and there is no provision made for such in the statutes

of our native Government. One would think when so much money is being scattered about in doles etc., that any project having as its object the betterment of the people, “the brightening of the countryside”, as it is called, and incidentally, the relief of unem­ployment – should enlist the practical sup­port of our legislators.
Not only this, but, very soon, I know the Valuation Officer will pay us a visit and then hand over his dossier to the Rate Collector, who will, in due course, send out his notice that so-and-so is due. If it comes to securing a general licence for a dance, the applicant pays £3 – just the same fee as is charged to the man who runs a dance hall, for profit. Is it any wonder, at times, that private initiative is lacking when anomalies, such as I have mentioned, operate. Be that as it may the Hall is a fact. It is there for your benefit, for reasonable recreation for the improvement of your social life, for any other benefits that may accrue to you from it, and they can be many if properly exploited.
I thank the committee in particular for their loyalty and co-operation. I must say it was a pleasure at all times to work with them. I thank also Mr. Dan Clune for the way in which he facilitated us in procuring the site. He acted very decently, and when it came to a question of splitting half a crown, I think he was the decentest man 1 ever made a bargain with (applause). In return for his kindness, 1 propose he be made an honorory life member of the Hall, that he can take part in all its functions, and if he so desires, to indulge in the light fantastic (laughter and applause).
“May the Hall “, concluded Canon Vaughan, “bring brightness and pleasure into your lives and help to foster in you a love of your homes and countryside, and restore some of their simplicity and modera­tion that was such a feature of our Irish life at all times and that permeated the walls of yonder old Abbey, that forms such a splen­did and appropriate background to St.Fineen’s Parish hall < applause).

Mr. Dan Corbett, in proposing a vote of thanks to Canon Vaughan, said that Canon Vaughan was not long in the parish when he set about repairing and beautifying the Churches. When that work was finished, he set about building that Hall, the finest of its kind in existence. He would also like to thank the committee, and the parishioners in general for their great co-operation and assistance. They were truly worthy of the deeds of their ancestors. He would make a special appeal to all to respect the Hall, to take a deep interest in its welfare, and by so doing, they would be paving their way to make good and perfect citizens. Mr. Corbett congratulated the people of the parish on having Canon Vaughan sent amongst them, and he expressed the hope that the Canon would be spared many long years to guide the destinies of the ancient and historic parish. 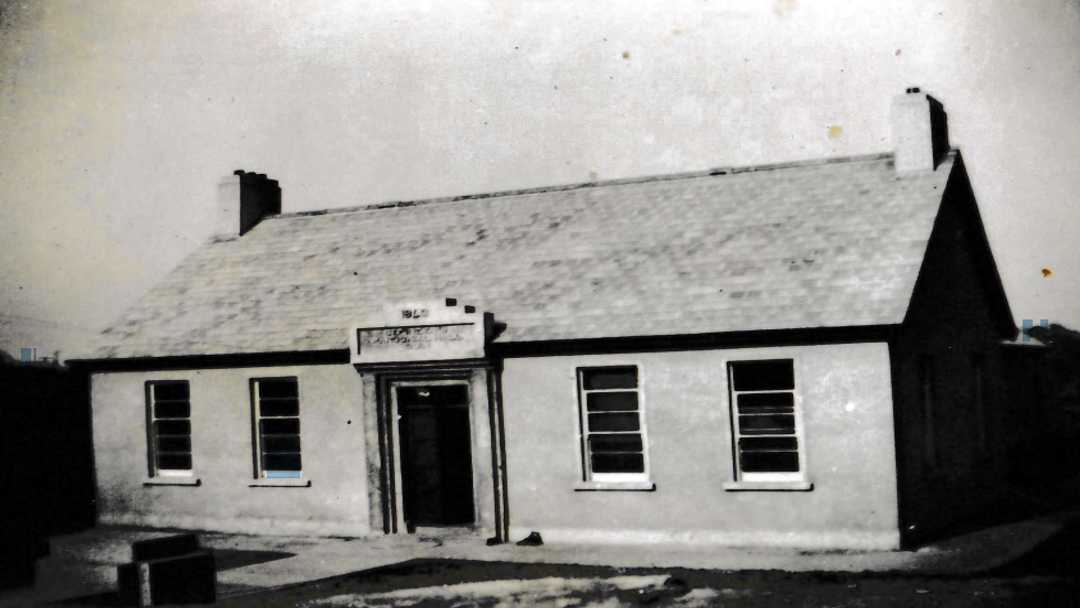 Taken from Clare Champion, Nov.2nd, 1940 and published in the first edition of the Quin – Clooney – Maghera Parish magazine 1987

The dance in the new Parochial Hall in Quin on Sunday night, in celebration of the opening of the Hall earlier in the day, will rank as the most successful and enjoyable
function ever held in the village. From 8 o’clock in the evening, motor cars carrying their loads, began arriving and in less than an hour the Hall was practically full. All
present were loud in their praise of the

general arrangements, including the seating accommodation, catering, the splendid floor and the choice music rendered by the Ennis Caiety Dance Band. The supper arrangements were supervised by Mrs. Weldon, N.T. and a staff of able and willing young ladies who had spent two days getting everything into shape for the big event. The attendance, numbering about 850, came from many parts of the county, a large percentage being from the town and district of Ennis, Tulla, Kilkishen, Crusheen, Newmarket-on-Fergus and other outlying districts were also represented. 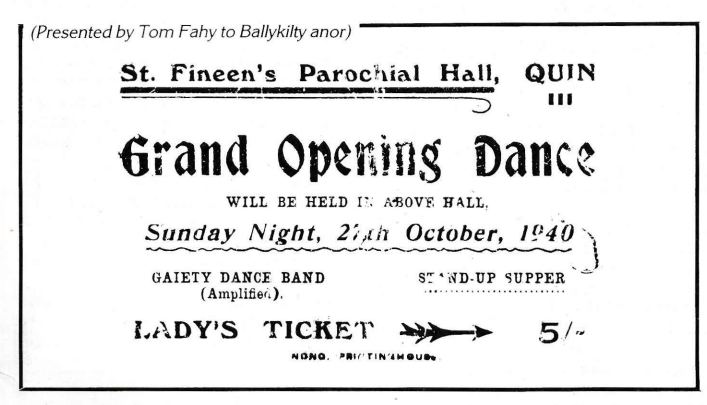