This is a very interesting section taken from the article written by Risteard Ua Cronín and Martin Breen titled “Ballymarkahan Castle – a MacNamara Residence of the Late-Medieval Period in Co. Clare” – The Other Clare, Vol 42, 2018.

O’Dwyer, chief of Kilnamanach in County Tipperary, Maccon Mór had  three  sons,  and  from  the  eldest of these sons Cumheadha, the MacNamara Fionn branch descends. Their territory was the barony of Bunratty or  West  Clan Cuiléin.  The  MacNamara Fionn was responsible for the building of Bunratty castle, Knappogue Castle and the friary of Quin, as well as other castles and tower houses in county Clare. By his second marriage to Anne, the daughter of O’Kelly, chief  of  Ui  Maine  (an area which straddled parts of the present counties Galway and Roscommon), Maccon Mór also had three sons, Sean ‘an Gabhaltais’, descend the branch which became known as MacNamara Riabhach, whose territory was the barony of Tulla, or East Clan Cuilein.8

The MacNamara Riabhach were also responsible for the building of several castles or tower houses in east Clare, the castle of Ballymarkahan is one of these constructions. The castle, although badly ruined, still remains many well executed features of late medieval castles.  Over sixty castles or tower were constructed in east Clare by the various branches of the MacNamara clan in the fifteenth and sixteenth centuries. Many of these structures

have broadly   similar designs. Ballymarkahan castle is a typical example of one of these fortified late medieval buildings, in its construction, its history, and its destruction. The history of this tower house and the description of its remaining features are discussed below.

Ballymarkahan tower house stands almost 16m. high to its full height. Only the north, west and portion of the south wall remain as the comer containing the circular staircase no longer stands. The building was constructed of dressed limestone rubble set in erratic courses on a base batter resting on a crude plinth of flat stones. The dressings around windows and doors are particularly well carved. The tower house was built in one section unlike many County Clare examples, which were constructed in two sections. The building is vaulted over the ground floor and second floor with corbels set in the lateral walls to carry intermittent wooden floors and also to support vault centring forms. 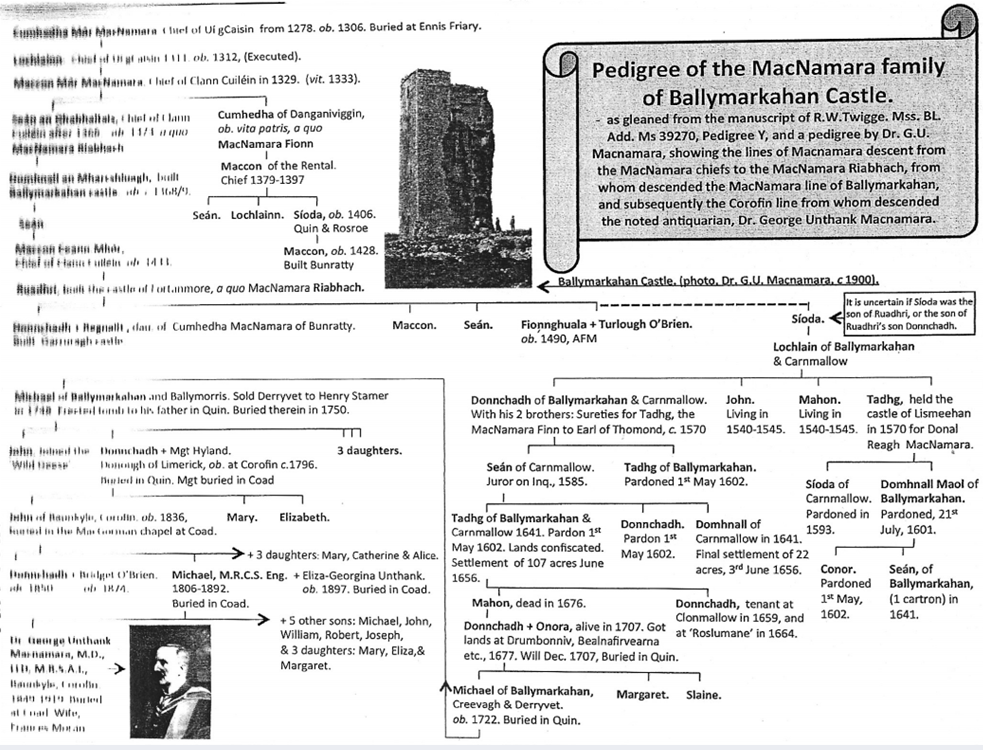 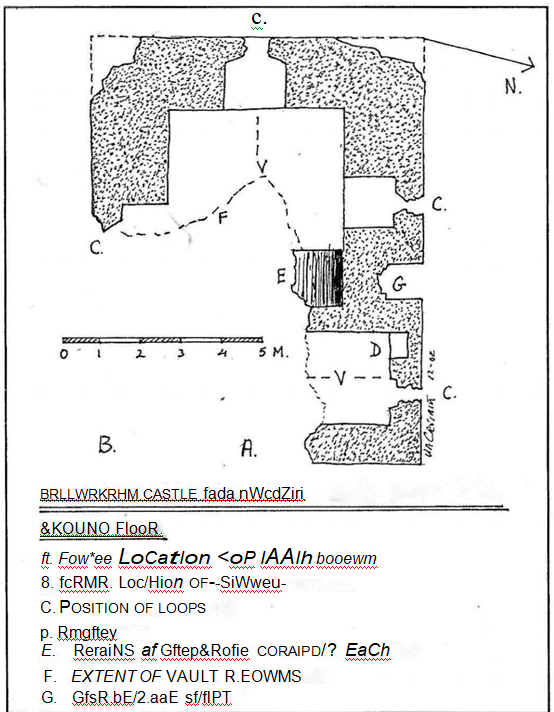 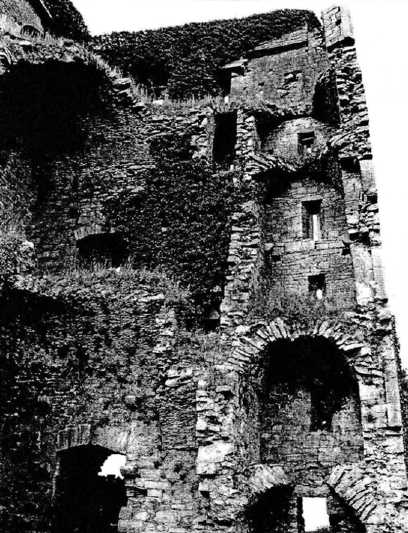 The ground floor contains a small porter’s lodge to the right of the entrance door and embrasures for loops in the south, west and north walls. The remains of a garderobe-corridor, supporting arch can be seen inside the entrance lobby, while the remains of the upper floor vault can be seen near the west wall.

The narrow stairwell section, most of which has collapsed, shows stone vaults over the ground, first, third and fourth storey narrow rooms, while the solar or top floor was all one room. There are two garderobes at first and third floor levels, the upper one containing a secret chamber to the left that has no window, but has an external slop-stone. The top room contains ogee headed loops and a finely dressed arched and splayed embrasure over the north and west windows, which appear to have been glazed, double light windows with central mullions.

To the northwest of the castle can be seen the footings of a bawn wall stretching over 60m. from the west wall of the towerhouse. These footings are regular and appear to be about lm. wide. There is also a natural spring well to the west of the tower house, and the remains of a limekiln lie about 20m to the east. At the northwest comer of the bawn wall footings is a low burnt mound which is likely a fulacht fiadh, and there is evidence that others exist nearby, on the bank of the marsh.

At the rear of the farmyard, about 50m. southeast of the tower house, is the remains of what appears to be a seventeenth century house with a large stone fireplace, (with a modem concrete lintel), and a brick bread-oven with overhead flue to its left hand side.

According to the various castle lists available, several individuals are credited with the construction of the castle of Ballymarkahan, although all are agreed that it was built by the MacNamara clan. According to T.J. Westropp, the castle was built in the period 1430-1450 by Donall, son of Shane, (Sean), ‘an Gabhaltais’ MacNamara, who died in 1373. This concurs with Standish Hayes O’Grady, who was quoting from lists of County Clare castle builders in manuscript form in the British Library, O’Grady added that one of the lists   gives   the above Shane MacNamara himself as the builder. According to Dr G.U. MacNamara, the soubriquet ‘an Gabhaltais’ (‘of the Conquests’), only appears in the later manuscripts, and was given to Sean because of his alliance with Brian Catha an Aonaigh