A tower house is a fortified medieval residence of stone, usually four or five storeys in height. Like most tower houses, this one too is in poor repair with collapsed walls and ivy covered exteriors reflecting centuries of neglect. They were the defended homes of a wealthy land-owning class.

Usually the floor plan is repeated in each of the upper levels. The chambers can contain deep wall cupboards and fireplaces. The latrine is set over a downward flue which allows the waste to be jettisoned from the building. The narrow slit windows provided little light to the internal living area but had a necessary defensive quality. 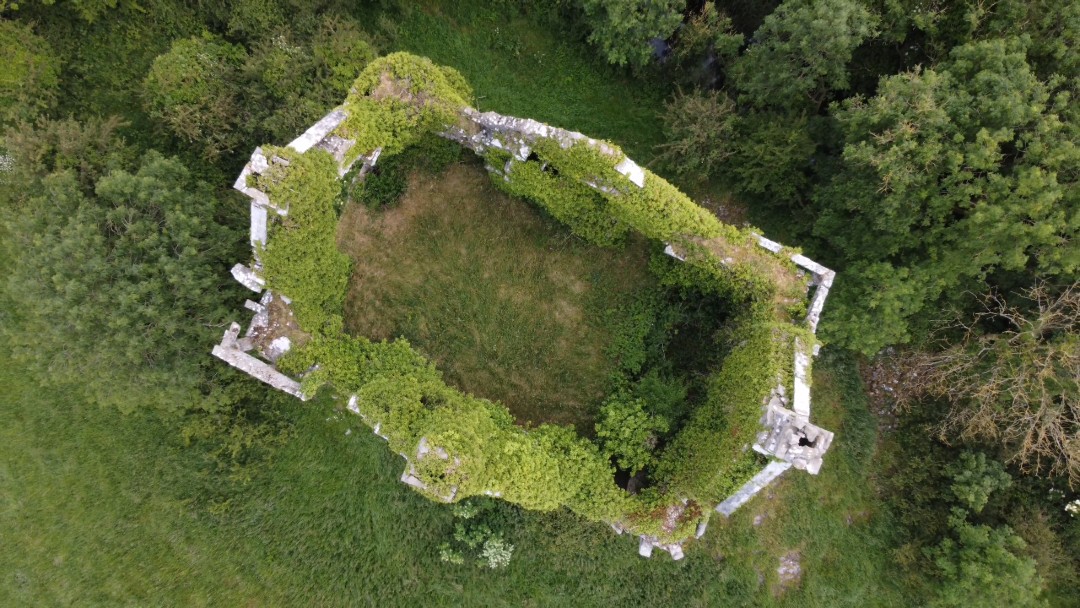 H.G. Leask in “Irish Castles” (1941) imparts how “Danganbrack had a tall tower crowned by high chimneys and four lofty gables which, unlike those of many other castles, are flush with the walls. The wall-walks therefore are not continuous but occupy only the angles of the tower and expand there into the machicolations, two of which are curved in plan”.

)“It was the property of John MacNamara in 1584 according to the Trinity College List.

The bartizans at the top corners, and the high gables and chimneys were added in the late sixteenth century giving it a more picturesque air than others of its type.

The building is a small square castle of the type known as ‘Peel Towers’. It is of a small size, a great height, with a small door, and all but the highest storey covered by barrel vaults. The passages and stairs are designed so that it can be easily defended if the lower storey were stormed.

The top floor was the principal hall in the castle and once had skilfully carved fireplaces.

Locally, it is believed it was so named as it’s a great place for trout fishing”.

We are informed by Luke Gernon’s 1620 account of life in a tower house that, “Hospitality was showered upon the guests from the moment they entered until the time they departed. The fire was kindled in the chamber, the bard sang, and food, alcohol and tobacco were consumed in large quantities, though the guests may have been expected to share the castle’s beds since furniture was scarce.”

Another account by a French traveller in 1644 stated, “ the houses of the nobility were nothing but square towers, poorly lit, with little furniture and with floors covered in rushes a foot deep of which they make their beds in summer, and straw in winter”. But when one thinks that the general population of the time lived in mud-walled cabins, the tower house was a secure homestead with heat and sanitation.