There is a facet of archaeology that is sometimes overlooked in Clare. It is stones related to funeral practices from the eighteenth & nineteenth centuries and possibly earlier.

Long before the advent of undertakers or ‘funeral directors’ local communities took care of their own dead. The women helped to prepare the corpse and the wake room; neighbours would dig the grave while another individual would be sent for drink, food and tobacco. A local carpenter or handyman would make the coffin.

As a final act of community, the coffin would be shouldered by local men, oft-times travelling along narrow paths for some distance to the church. The tracks along which the funeral procession travelled were known as ‘coffin paths.’ They can still be pointed out in the Clare landscape. Relays of men would take turns to get the corpse to its destination, with at least four shouldering the coffin at any one time and four more ready to step in as required.

When the cortège paused on the journey, it was considered inappropriate for the coffin to touch the ground. Consequently large stones were identified on which the coffin was rested. When ready to proceed, the stone made it easier to lift the coffin and carry on.

As always, local society observed the formal courtesies. The rule for the cortege was the shortest way to the church and the longest way to the graveyard.

At the graveyard, there was again a procedure for handling the coffin. This came in the form of a ‘coffin-rest.’ These rests were sections of the cemetery wall that were slightly lower than the parapet, with a reasonably wide and level section of about two metres in length, fashioned to allow a coffin to rest without disturbance. The rests usually had one or two stiles or stepping stones on either side to allow the bearers to enter with the coffin. Of 130 cemeteries in the county, perhaps 20 or so still retain their coffin stones or coffin-rests.

These funerary practices continued through the nineteenth century until finally replaced by horse-drawn hearses along the main roads.

Some of the old funeral architecture can still be seen across the county.

Here is a shortened list of coffin stones and other features in Clare parishes.

Here are some coffin rests and coffin stones found close to Quin parish: 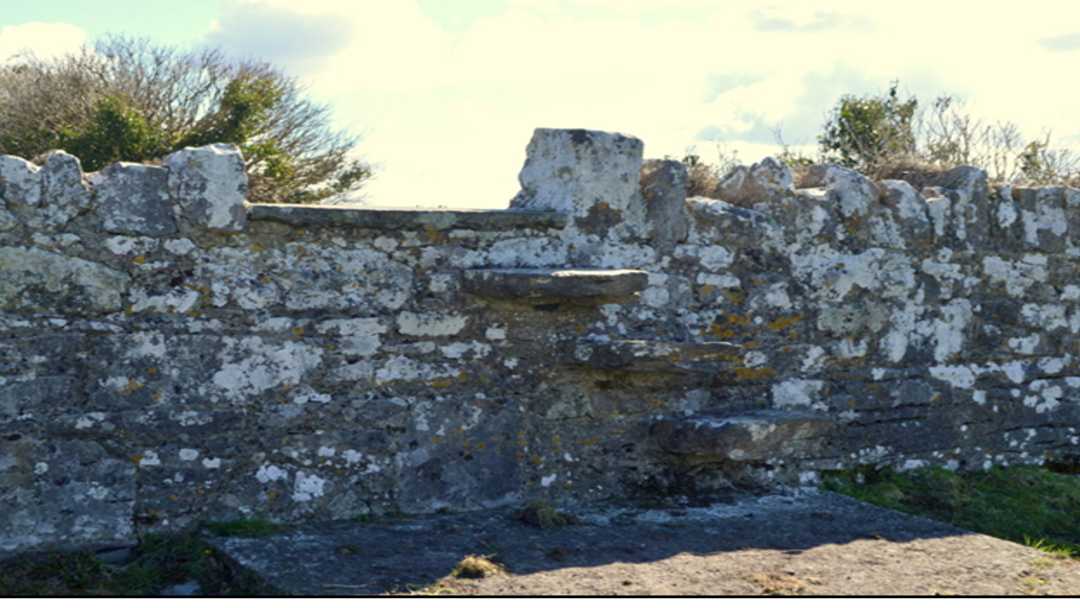 Fenloe in Newmarket on Fergus parish is beside Finn Lough Lake, what lends it its name. It has a 14th century church, some sections of which may be earlier. It is probably best known for its founder, the sixth century Saint Luchtighern and his curative ‘plague stone.’

The coffin rest is on the west wall, necessitating entrance into the private field outside the graveyard. The tradition here is to take the coffin through the main gate and then exit through the gate on the west wall, into Costello’s field. A few metres to the north is a concrete platform, a stile and a coffin-resting stone in the wall. Here the pall-bearers place the coffin on the rest. There are steps leading to the restin the wall. Those inside the graveyard receive the coffin and carry it on to the grave. This has been a practice of long duration.

Unusually Inchicronan parish (Croisín) retains coffins stones en route to two of its cemeteries, one heading to Doon and the other to Inchicron Priory. Elsewhere, most remaining coffin rests are incorporated into the infrastructure of graveyard walls. 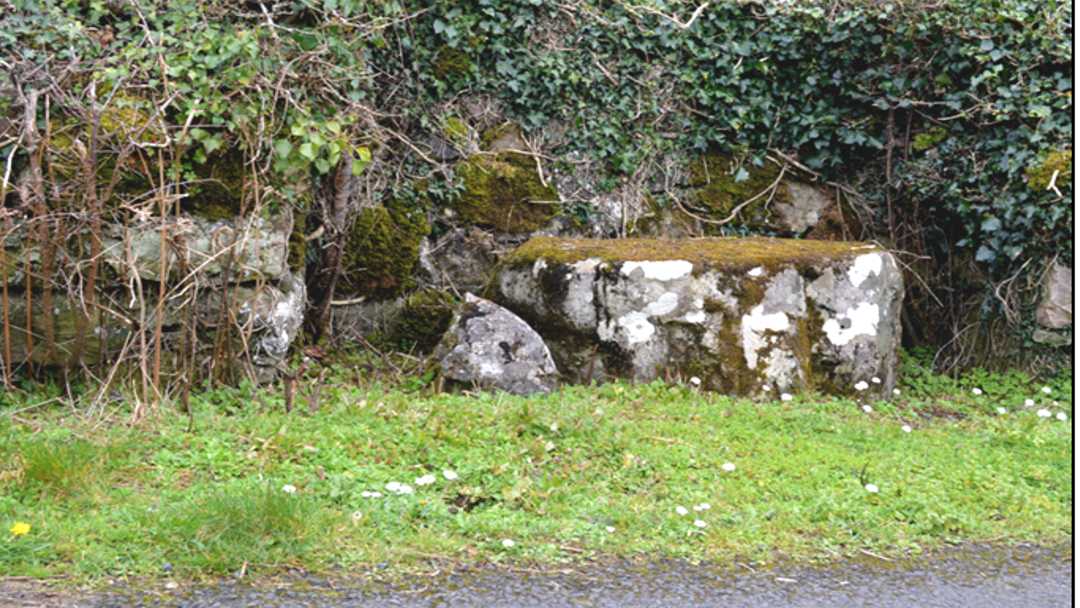 The stone lies on the grass verge of the road about half a kilometre from Doon cemetery. It is level at the top and was most likely fashioned that way. It is heavy, perhaps weighing 150-180 kilograms so that it would have taken a team of men to place it there in the first instance. It may have been moved closer to the wall to facilitate road works since last used. Its title, Cloch na h-Onóra, ‘the stone of honour’, suggests that its function went beyond offering a respite when carrying a heavy coffin.

‘Long ago when coffins were carried on men’s’ shoulders all the way to the cemetery it was customary to rest the coffin on certain large stones. This stone was called Cloch na h-Onóra’[2] 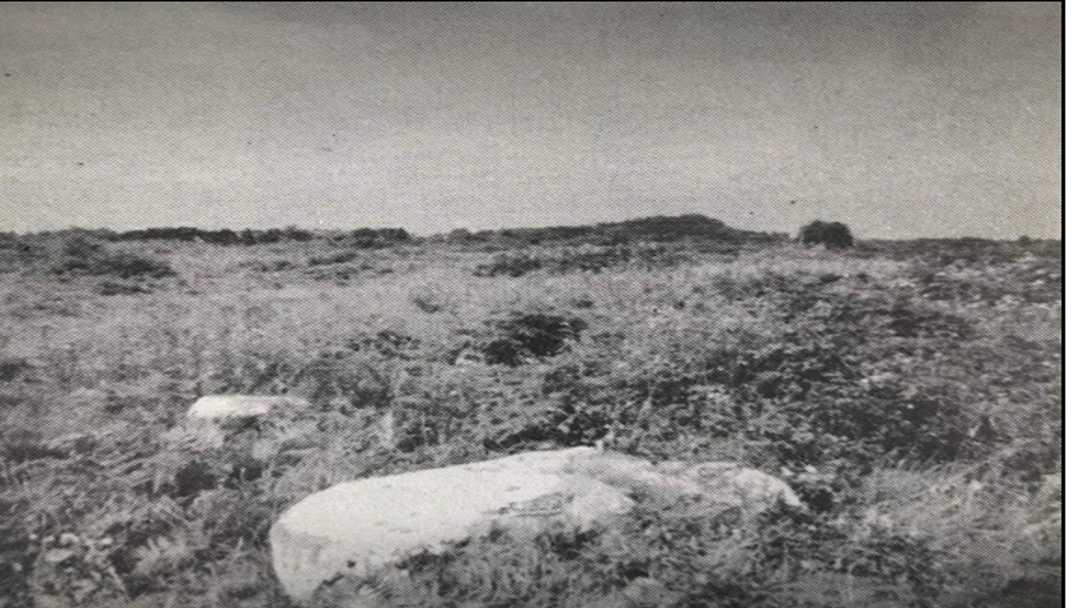 The following is from the School’s Collection, NFC, 1938.

This description of the location and dimensions is from the National Monument Servicesfrom 2016:

‘Situated in a rough overgrown area c. 10m E of a pathway to Inchicronan Abbey (CL026-014001-) indicated on the OS 25-inch map. Two undisturbed coffin-resting stones, 0.8m apart, one larger limestone one apparently used for adult coffins and a smaller one for children’s coffins. The larger stone (L 1.7m; Wth 0.93m, H 0.4m) is a natural limestone block aligned E-W. The surface slopes slightly to the W and is mostly flat with an uneven portion at E. The smaller stone (L 0.64m; Wth 0.54m; H 0.41m) is of sandstone and is aligned NE-SW with a flat and level surface and a straight edge at NW. There is no carving evident on either of the two stones.’[2] 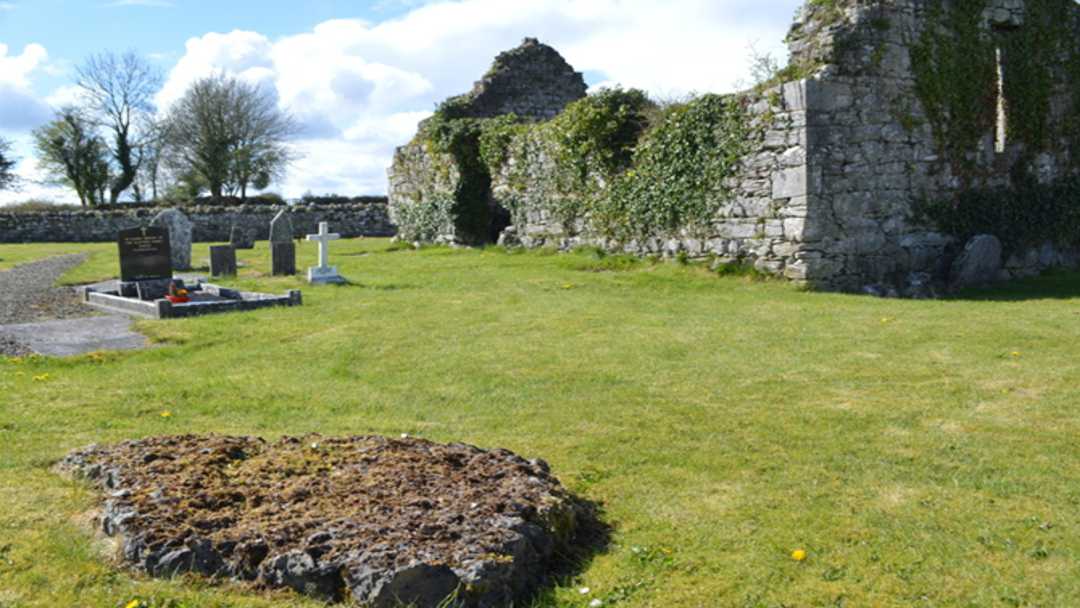 The coffin-resting stone is in an open area, southeast of Killoo Church, close to the elaborate Lynch memorial. It is low to the ground but sufficiently large enough to accommodate a coffin,

‘In the town land of Killow, Clarecastle, there is an ancient church and graveyard. There is no definite information available regarding the Church. It is probable that a Monastery was founded here about the middle of the 7th century AD by St Molua or Lugad of Killaloe. It seems to have survived the Viking wars and it became a Parish in its own right following the 12th century reorganisation of the Irish Church. The first record we have regarding this Church is the Papal taxation of 1302 where it is listed as a Parish with a valuation of 3 marks. It was united with Clareabbey later on.’

‘(Local man) Niall McCabe recalls his father Tom telling him of the tradition on a funeral day of the coffin pallbearers shouldering the coffin and resting it on a flat stone, possibly a Mass Rock in penal times which is situated in front of the Lynch vault. This stone was regarded as having healing powers and the belief was that the corpse left this world for a better life in heaven with all the pains and worries of this life removed.’[1] 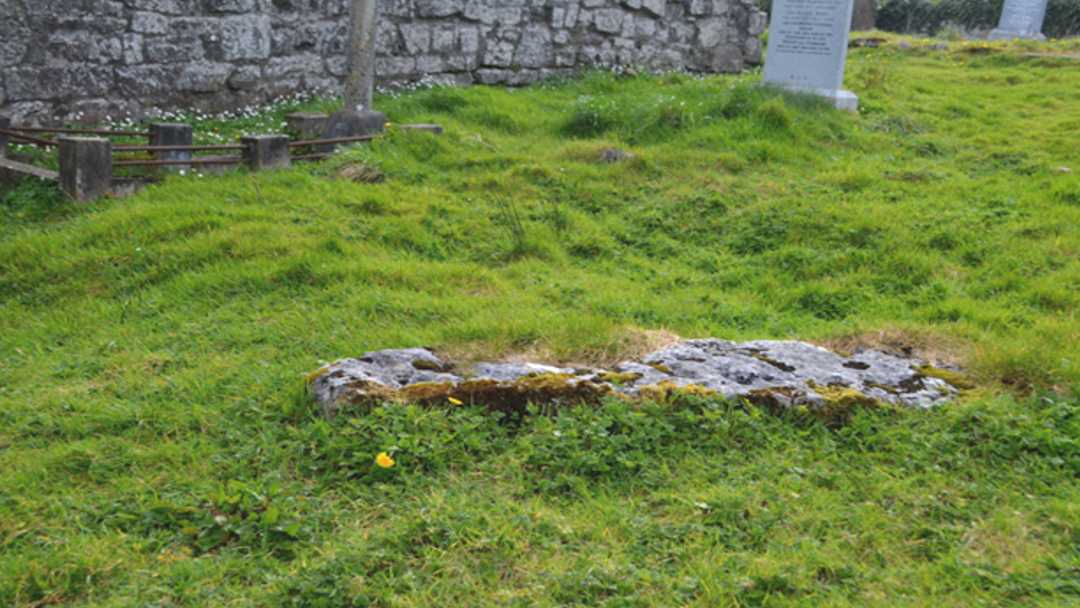 Killone Nunnery was founded in 1190 by Donal Mór O’Brien, King of Thomond. It continued to function as a sister house of the Augustinian Abbey in nearby Clarecastle until the Reformation. Additional structures were added in the fifteenth century. The graveyard here was used into early modern times and may still receive a funeral to a family grave.

The coffin stone lies close to the west entrance of the added extension from the 1400’s. The stone is roughly rectangular in shape and about 10 cms high. It was intended as a platform to keep the coffin off the grass as this was considered both disrespectful to the dead and a possible source of ill luck.

A Possible Commemorative Stone in Feaghquin?

In the National Folklore Collection from the Clare area, one young girl wrote of a leacht and a local custom in the village of Quin that pointed to something very close to the coffin stone tradition. This ‘leacht’ seems to have been a combination of coffin-rest and a commemorative cairn.

‘There is a place in Feighquin called “leacht na marbh”. There is a round heap of stones raised to a point there. The reason it is called “leacht na marbh” is long ago the main road passed by the side of this leacht of stones. When a funeral was passing by, they used to rest the coffin on the top of the leacht, and everyone at the funeral would leave a stone on the leacht’[1]

There is a second very similar story told about the cairn:

‘There is a heap of stones on top of Hassett’s hill, and it is called “leacht na marbh.” Everybody that used pass that way used throw a stone on top of the heap, and say “May the Lord have mercy on the dead.” It is said there is a chieftain buried there.’[2]

The ’main road’ mentioned in the first account may have been a coffin path.

What these artefacts and stories point to is the propinquity that once existed between the community and the deceased and the many notable customs around death that existed in the past.

A coffin path emerging from the landscape at Carrowkeel, Kilshanny, beside Saint Augustine’s well.

A small bridge crossing a stream here is known as

‘Droichead an Chorp’ – The Bridge of the Corpse. 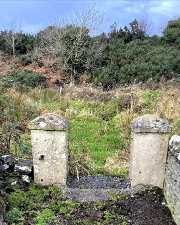 Below is mention of some more coffin resting stones in the county. These were photographed and kindly provided by Antoinette Darcy. 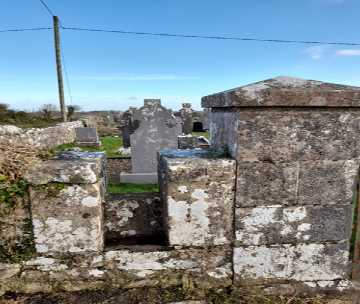 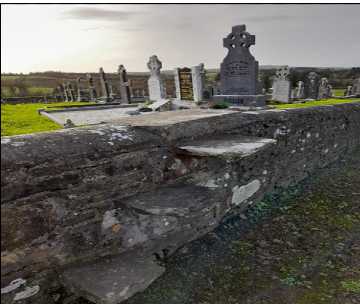 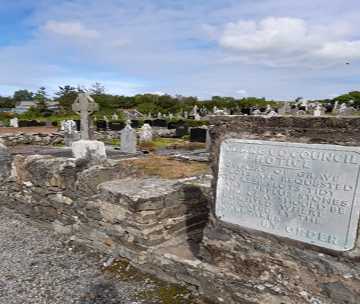 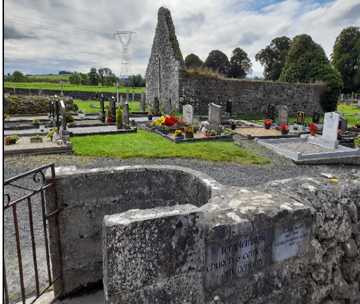 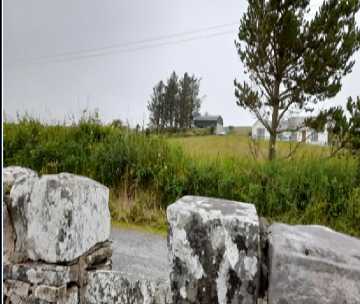 Much more research’s needed on funeral artefacts and customs from County Clare. There is a huge story to be told here.

Salvador Ryan,Death and the Irish: A Miscellany, Wordwell, Dublin, 2016