Hazelwood House was described in Houses of Clare as being located in the townland of Ballyhickey, the ancestral home of the O’Hickeys, physicians to the O’Brien family.[1]  The house was the home of Hugh Brady Singleton, the second son of Edward Dalton Singleton, a second son of John Singleton Sr and Marcella D’Alton.  Hugh was a brother to John Singleton of Quinville and Edward Singleton and Anthony Singleton.

The Singleton family played a prominent role in Quin throughout the 19th and 20th century.  Hugh Singleton was noted for being a controversial landlord who had been the subject of difficulties with his tenants, as well as with his neighbours.  In 1833, there was an exchange between himself and John P. Molony and Ralph Mansergh over trespass through his lands for hunting purposes.   The incident was reported in the Freeman’s Journal where a criminal case was brought by Hugh Singleton. Hugh Singleton maintained that not only were the two men trespassing on his lands, but that they used abusive language towards his steward, and then demanded that Singleton fire him, and that Mansergh on another occasion, challenged Singleton about the incident.[2]  The case was eventually settled in December of the same year  with a payment by Molony and Mansergh of £100 for sending a hostile message to Singleton.[3]  Hugh Singleton also had difficulties with Lord Dunboyne.  The incident was similar in nature to the earlier case with Molony and Mansergh.  Hugh Singleton had gone riding and had ridden through Lord Dunboyne’s demesne.  Lord Dunboyne confronted him over it and threatened to shoot him, called him “a ruffian, a vagabond, and threatened to put a bullet through his head”.  The incident was corroborated by several labourers who were present.  Singleton challenged him to a duel, but instead brought charges against Dunboyne.[4]  It was reported in the Belfast News-Letter several months later, that Dunboyne had made an apology, and the case was settled.[5]

It was not known why Singleton had had difficulties with other gentry and neighbours as evidenced above. The estate lands at Ballyhickey had the distinction of holding the largest mine of lead in County Clare.  The lead mine was very successfully quarried in the 1830s with substantial ore mined at a profit.[6]  It may have been jealousy that had instigated some of the incidents.

An incident that occurred during the Famine years may give a clue to Singleton’s behaviour.  In September 1846, Hugh Singleton had arranged for corn which had been harvested on his estate to be brought into Limerick for sale.  It was way-laid at Moll Ryan’s cross between Knappogue and Rathlooby where a group of men attacked the car.  Stones were thrown, and a shot was fired which wounded one of the horses.  The two caretakers turned the car back and returned to Hazelwood.[7]  The incident was notable as it was during this month that the newspapers were reporting dire conditions and the “impending Famine”.  Only two weeks after this incident, one of Hugh Singleton’s land stewards, McMahon was murdered at Cloontra.  He had been under police protection in the course of his duties on the estate and had had difficulties with tenants in arrears.  His body was found the following day.[8] Hugh Singleton had apparently not been seen as a very charitable or sympathetic landlord to tenants in difficulties, even at the beginning of the Famine when the potato crop was first noted as having failed.

John Copley Singleton married Elizabeth Bindon, a daughter of Burton Bindon of Clooney Castle.  This couple married in 1855 and they had a number of children, but only 2 survived to adulthood.  Their daughter, Janie died aged 13 in 1869 of scarlet fever.  She was buried in the Singleton plot in Clooney graveyard.  John Copley had been named after his ancestor John Singleton Copley, the famous American portrait artist.  John and Elizabeth Singleton’s second daughter, Elizabeth Singleton Tuckey would also become a well-known pianist and artist who performed in Dublin.[10]She married Davys Tuckey early in the 1900s.  Her sister, Eleanor Singleton married Walter Craven in England on 18 July 1895.    Both John Copley Singleton and Elizabeth Bindon Singleton were buried in Clooney Graveyard in the Singleton plot.  John died in 1890 aged 58, and Elizabeth died in 1918 aged 83.  Their children were also buried there with them.  It is not known if either daughter was buried in this family plot.

Hazelwood House was burnt to the ground on 5 July 1921 by the IRA.  The property suffered damage in the amount of one hundred thousand pounds and it was never rebuilt.

Hugh Singleton died on 29 September 1878 aged 82.  There was a tablet to his memory erected by his daughter, Annie McGhee in the Church of Ireland graveyard at Quin.[11] 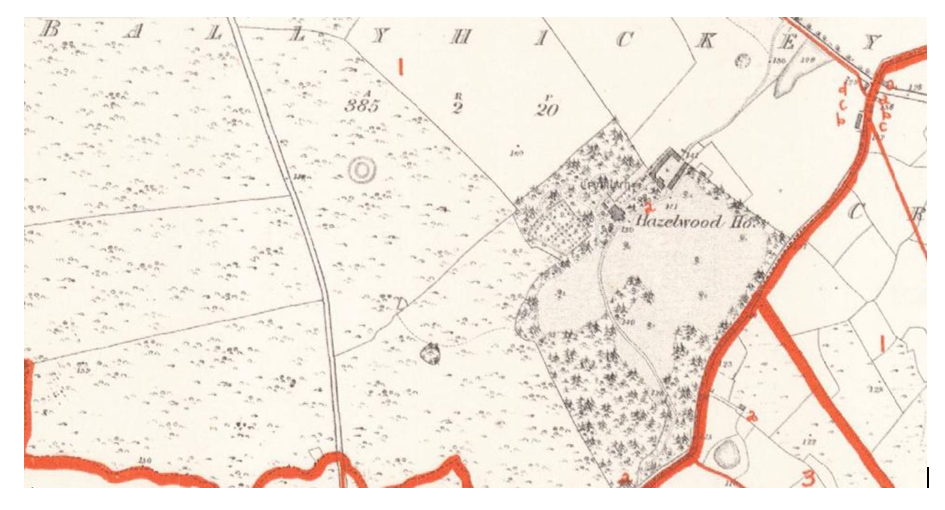