The Singleton family in Quin were originally from Lancashire in England.  They first came to Ballygireen, Newmarket-on-Fergus in the 17th century where John Singleton resided with his wife, Jane Bruffe and their son, John and two daughters, Sarah, and Anne.

Their daughter, Sarah Singleton married Richard Copley, a tobacconist in Boston, Massachusetts.Interestingly, Richard Copley may have also had County Clare connections.  An Anthony Copley was renting lands from Richard Lord Clive as noted in an account book dated 1761.[0]  Those lands were located in the civil parish of St. Patrick’s which is the Roman Catholic parish of Parteen. Sarah Singleton Copley and her husband Richard settled in Boston where they ran a tobacco shop in the city.  Richard was in poor health for several years and died shortly after the birth of their son, John Singleton Copley.

Sarah later married Henry Pelham, a portrait artist, and teacher.  It was Pelham who most likely mentored John’s artistic abilities and by the time that he was a young adult, he was a well-established portrait artist who had painted for many of New England’s wealthiest families.

John Singleton Copley left Boston in the early 1800s and made his home in England dying there in 1815 in London.

There is a plaque to his memory in Boston on Beacon Street the site of the Somerset Club. 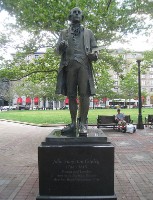 John and Jane Bruffe Singleton’s only son John married Marcella Dalton of Deer Park. This couple resided at Quinville Abbey, and they had several sons: John and Edward Dalton as well as several daughters: Jane and Mary. Edward had become the heir to Quinville on the death of his father, John. He and his wife, Mary Brady resided in Quinville until his death in 1814 when his son, John became the heir to Quinville. John married Isabella Carew Creagh in 1819 and they had the following children: Michael, John, Edward Newport, Sarah, Mary, Susan, Isabella, and Marcella.

It was John Singleton who was a Justice of the Peace (JP) and High Sheriff of County Clare. He was also a large landlord with estates not only in Quin but also in West Clare. He had commissioned the renovation of Quinville House in 1828 and the house was notable for the Elizabethan style. The Singleton family would continue to reside in this house until the early 1900s. 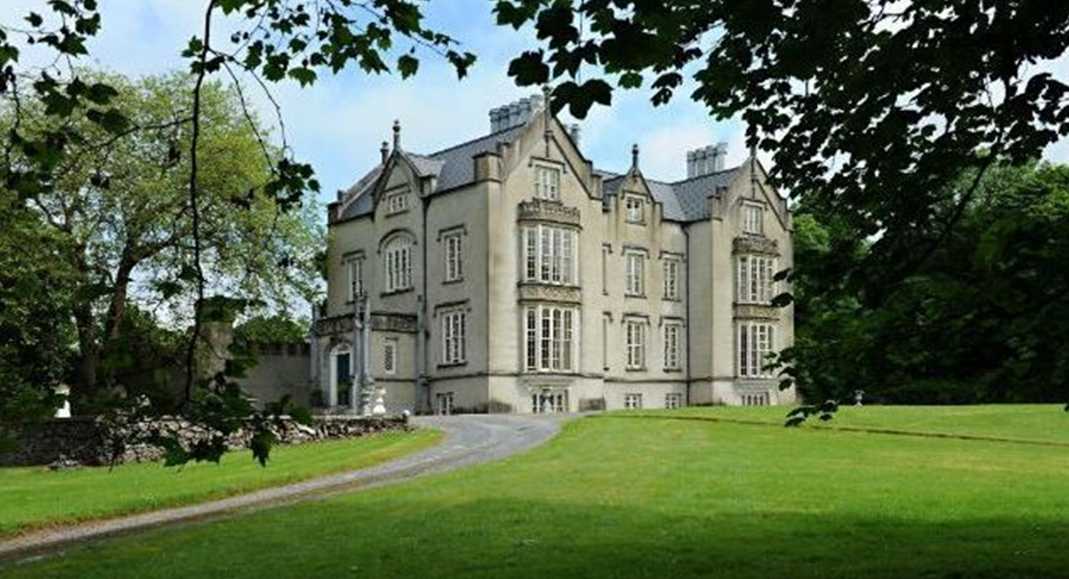 John’s wife, Isabella Carew was an heiress of the Creagh family of County Cork.  The Creaghs were also connected to the Creaghs of Dangan.

It was John Singleton Junior’s second son, John who became the heir to Quinville on his death.  John’s wife, Isabella Carew died in 1861 after a fall from a horse resulting in serious injuries.  Her death was noted in the Limerick Chronicle as follows:

On Monday last, from the effects of a severe fracture of the leg to the great affliction of her attached husband and family, Isabella, wife of John Singleton of Quinville Abbey, County Clare[1].

The Singletons had previously suffered the loss of their youngest daughter Marcella in 1857.

Marcella Elizabeth Singleton died very tragically in a house fire when her dressing gown caught fire while she was preparing breakfast for her brother before he headed off for a day of shooting.  The accident and her death were widely reported in the local papers.

Transcribed from the Limerick Chronicle on 21 March 1857:

The Limerick Chronicle further published a death notice of Marcella in its edition several days later:

“The Death of an amiable lady, whose demise we recorded in our last, was caused by an accidental ignition of her clothes while preparing breakfast for her brother to go out hunting.”[3]

In the Limerick Chronicle edition of 28 March 1857, her death was noted as follows:

In the Bloom of Youth, to the deep regret of her fondly attached parents and friends, Marcella Elizabeth, youngest daughter of John Singleton, Esq., of Quinville Abbey, County Clare.  “Her end was peace, and she gently resigned her spirit trusting alone in the finished work of her Divine Redeemer.”[4]

In 1867, John Singleton Jr married a second time to Emma Woodforde, a widow.

John Singleton Jr died in 1877 and his death was noted in the Clare Journal:

On the 5th Instant at Quinville Abbey, John Singleton, Esq. in his 86th year, beloved and revered by all who know him.[5]

John’s second son, John inherited his father’s estate and he resided in Quinville until his death in 1880 at the young age of 54.  His death notice was published as follows:

“John Singleton of Quinville Abbey, Co. Clare, (Lieut. Col. R.A., Col. In the Army, and retired Lieut-Gen. born 4 April 1826; m. 4 Jan. 1850 Catherine Marianne, eldest daughter of Major Gen. Barry, R.E. Major Gen. Singleton served in the Eastern campaign 1854-5; at the Alma, Balakavia, Inkerman, the siege and fall of Sebastopol, and in India in 1858, commanding the artillery in the repulse of the Sepoys at Mooltan, during the Mutiny.  He had medals and claps, the Order of Medjidie, the Legion of Honour, &c. and was thanked by Lord Raglan for his served 26 Oct. 1854.  He d.s.p. Aug. 1880 and was succeeded by his brother Edward Newport Singleton, late of Quinville Abbey.”[6]

John Singleton and his wife Catherine did not have any children during their marriage so Quinville Abbey was later inherited by his younger brother, Edward Newport Singleton.  Edward was the third son of John Singleton Junior, and he was married to Annie May Richardson.  This couple had a number of children, but the male children diedat young ages, and only the females reached adulthood.  Edward Newport Singleton died on 20 April 1896, and he was buried in Kilnasoolagh Church in the Singleton vault which is located at the back of the church building.[7]  Quinville Abbey later came into the possession of James Butler-Ievers who resided there in the 1901 and the 1911 Censuses with his wife,Isabella, and their household.[8]