The Diaries by John Singleton of Quinville House 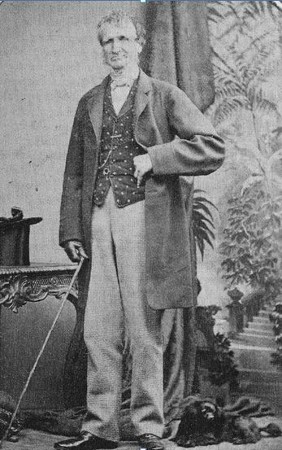 This brief passage is to introduce the Singleton family and most especially John Singleton’s Diary. The Singletons originally came from Lancashire and settled in county Clare at the end of the 17th century. John Singleton married Marcella Dalton of Deerpark, heir to her brother. Their second son Edward Dalton Singleton lived at Quinville and three generations of his descendants, but the male line died out in the late 19th century. In the mid-19th century the Singleton estate was centred on the parish of Quin, barony of Bunratty Upper, county Clare, with additional parts in the parishes of Kilnasoolagh, barony of Bunratty Lower and Killard, barony of Ibrickan. By the 1870s Hugh Singleton of Hazelwood, parish of Clooney, second son of Edward Dalton Singleton, owned 1,535 acres and his older brother John Singleton of Quinville Abbey owned 1,927 acres in county Clare.[1]

Quinville Abbey House at the west of Quin village was the principal residence of the Singletons. Built in the 18th century, it was restructured in the early 19th century in the Elizabethan style by the famous Pain brothers. John Singleton was the paterfamilias of Quinville.  When he and his family returned from the European Grand Tour in 1840 they were greeted by the local curate Fr. Corbett and hundreds of their tenants.[1] This was done more out of a sense of duty than affection as they were rated very poor landlords. Quinvillecame into the ownership of James Butler Ievers in the latter half of the 19thcentury.The Singletons seemed to have moved to Ballygirreen and Limerick city.

John Singleton of Quinville published a diary that covered many of the turbulent years in Quin. Without prompting, we let the diary extracts speak for themselves.

The Diaries of John Singleton 1845 from Quinville House

Passing through our village now, it’s hard to visualise the hardship and despair of the 1840’s. At times, I found it quite chilling to read the diaries of John Singleton from Quinville house.

The National Library of Ireland was fortunate to acquire his diaries 1845-51 which provide a social context to life in Quin at the time. The ‘Clare Journal’ wrote of Quinville in 1872, “The mansion nestles in the bosom of cherishing foliage giving it a sweet air of repose.” In 1845 John was in his fifties and living a gentleman’s life as one would expect. He was a Justice of the Peace and attended both Petty Sessions and Board of Guardians meetings. There were also the never-ending visits to the local big houses of Carrigoran, Carnelly and Dromoland.

An informative entry appears on August 11th 1845, “A very fine day – a festive scene this evening at Quinville by reason of a great dinner, dancing, music, prizes, etc. to all the labourers tenants, their wives, daughters, sons amounting to about 150 as a farewell to John (his son) who goes off to London and Woolwich tomorrow to join his Royal Regiment of Artillery for the first time, nothing could go off better, happier or more harmoniously than the whole affair; dancing kept up in the barn till ½ past one o’clock”.

On the 29th of October he refers to the failure of the potato crop for the first time: “to Ennis this day and attended the Board of Guardians at the Workhouse, much discussion on the melancholy potato failure of this year”. They begin public work schemes for the people during these times of “distress”. In his own district of Quin, he noted on April 2nd 1846, “Many poor people in direct distress for want of food and almost all of employment”. He informs us how a Co. Surveyor will lay out some work in Quin “for the relief of the poor….the village is to be improved”.

However,the failure of the crop wasn’t curtailing his social activities as he attends dinner in Castlecrine. In 1846 they began to distribute the Indian meal in Quin to only “those in need”. In August of that year came “the wettest days…considerable damage done to the corn cut…to the potatoes and hay irreparable”. He believes “the landlords in the long run will be the real sufferers”.The Relief Committee in Quin faced much unrest in September 1846 despite grants being given for roads. There were raids for arms as the natives tried to stop the shipping of corn from Clarecastle to Limerick as from there it would be exported.

The early months of 1847 were taken up with Relief meetings and we learn that April 13th of that year, the soup kitchen began in Quin to help the poor. This is followed by a poignant entry in June, “Passed these mornings chiefly in Quin amongst the poor people who are in the deepest misery – hunger and disease – the cooked food being given out all day long and they are not satisfied with it”.  Indeed he imparts how,  “Hundreds of famishing and discontented people up at the avenue gate this morning crying out loudly against the cooked food”. In spite of the famine and the continuing protests about the food, Quin Fair was held on July 7th but prices were not very high. In August Mr. Singleton tells of how he is “digging out my potatoes for fear of they being dug for me”. In December of that year he even attended a ball at Tulla, “which did not break up till 6 o’clock next morning”.

But the reality of the lives of the Irish was much different as he attended ‘The Special Commission’ in Ennis and heard several cases of murder, assault and gun stealing. They executed three for murder and transported many others. Starvation and destitution were widespread at this time, as growing crops were cut down at night, cattle and sheep were killed by the suffering people.