Saint Luchtigern or Luchticern, son of Cutrito, lived during the early sixth century. Hewas founder of the monastery beside Finnlough Lake, approx. 5 kilometres south-east of Quin village.The Irish name of this area is Tuaim-Fionnlocha, the Tomb of the Fair Lake, as recorded in the Annals of the Four Masters:-

As is so often the case with early Celtic monks, they located their church in a place of quiet beauty. Fionn Lough, is the dominant feature in the immediate area.

The monastic church stands back a short distance from the lakeshore.This area is one of the old ‘seven parishes’ of Newmarket on Fergus. 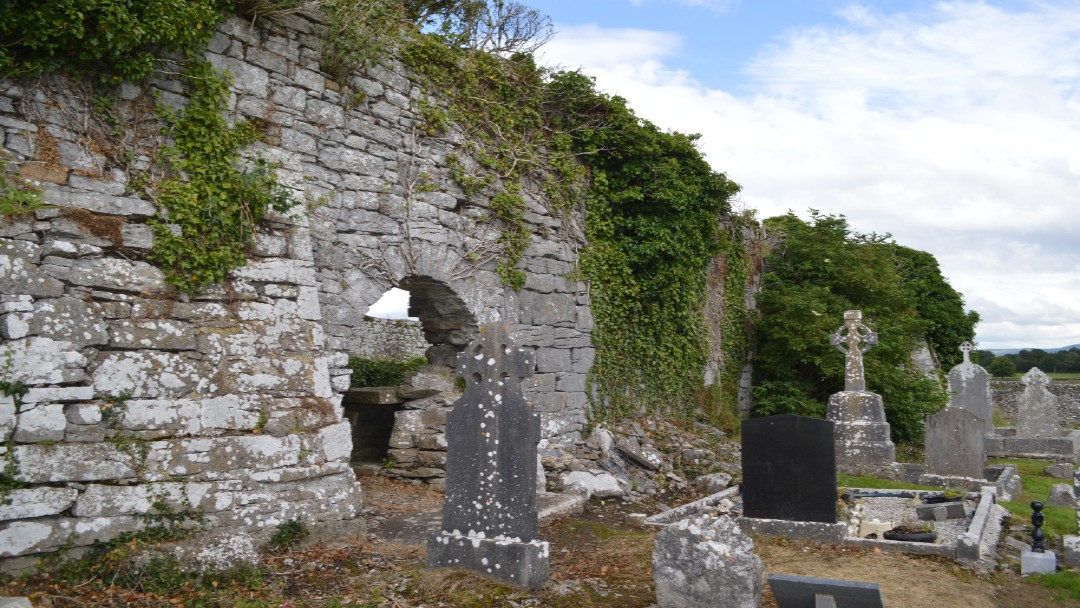 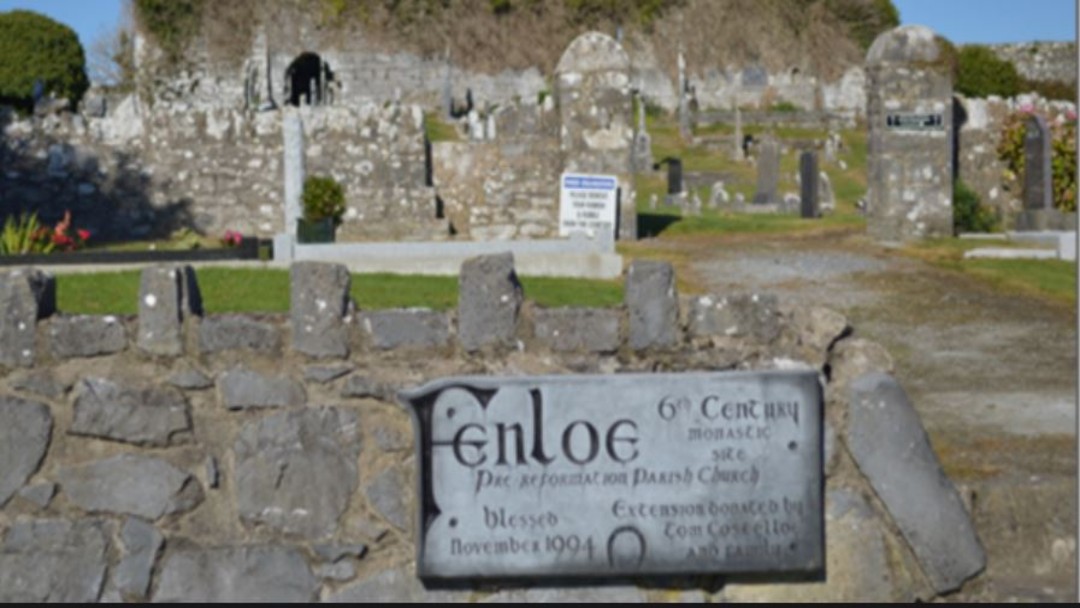 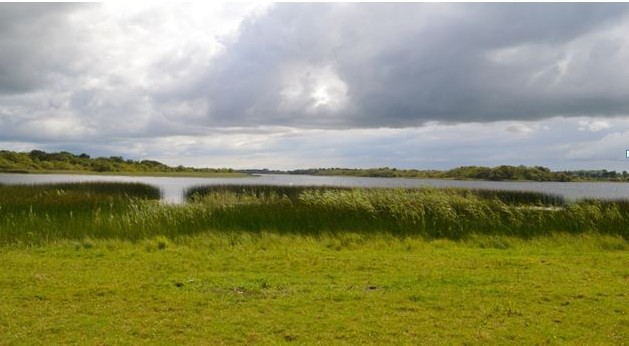 The church, now sadly in poor repair, shows evidence of three separate building phases. Large blocks of masonry around the door on the south side, represent the earliest phase, and date to between the tenth and the twelfth century.

.During the Anglo-Norman occupation of the area in the late thirteenth and early fourteenth centuries, the church was restored and some fine cut-sandstone windows were inserted into the south wall and east gable.

In the fifteenth century, the triple light east window was blocked up and a double light trefoil-pointed limestone window was inserted.

Note that on the closed-off twin window in the south gable with molding shown here on the left, there is evidence of the use of red sandstone

A stone, known locally as the ‘Plague stone’ or the ‘Cholera stone,’ is located on the outside of the graveyard perimeter wall (suggesting more extensive monastic grounds in the past). An old story tells that a woman suffering from the plagues came to Luchtigern one day and he prayed over her placing his hands on her suppurations. He cast all evidence of illness from her into a large stone. The stone has two raised circles, one with an inner circle and the second has the shape of a cross. They are said to imitate the pustules that appear on the skin when afflicted by the plague. Saint Luctigern is said to have endowed the stone with curative powers against disease.Thereafter people came to the stone for cure of ailments.

During their visit to Fenloe in 1839 the Ordnance Surveyors, O’ Donovan and Curry recorded the following:

‘The stone at which the miracle was performed was from thenceforward called “The Plague Stone” the name by which it is known to this day. The plague did not on that occasion make its further appearance within the distance of two miles at any side of Toomfinlough, nor has it done so ever since, for even during the late terrible ravages of the Cholera a single case of it did not occur within the above distance of this plague stone. This is asserted to have been the fact, whatever might have been the cause.

On that occasion people crowded in thousands to perform rounds, etc., at the plague stone, but whether its protective influence extended beyond the limits of its Termon or not, it would be very difficult to ascertain.’   (Ordnance Survey Letters by John O’Donovan and Eugene Curry, Parish of Tomfinlough, 1839). 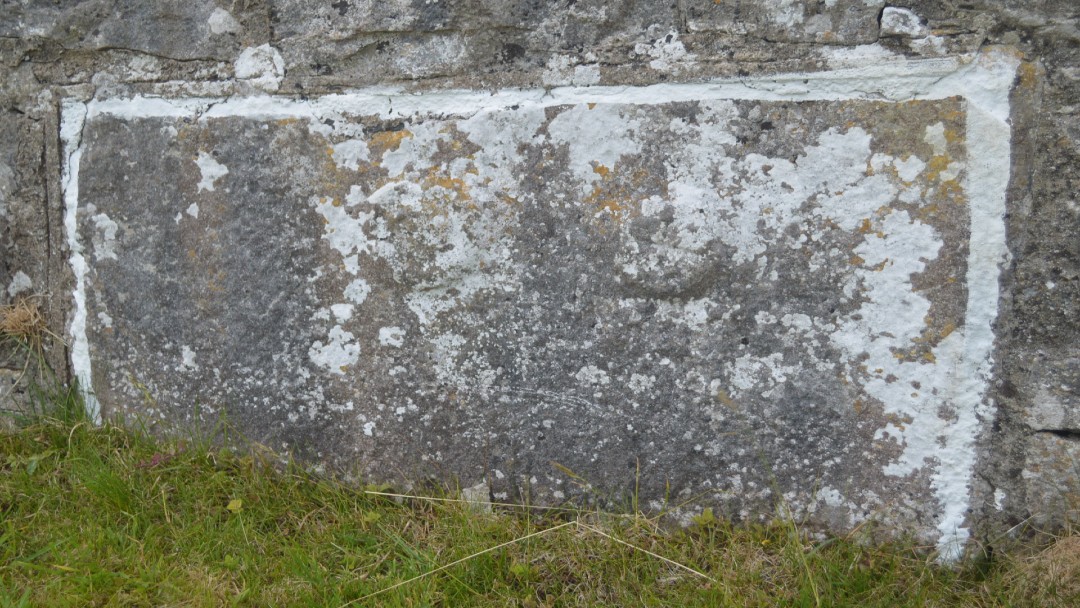 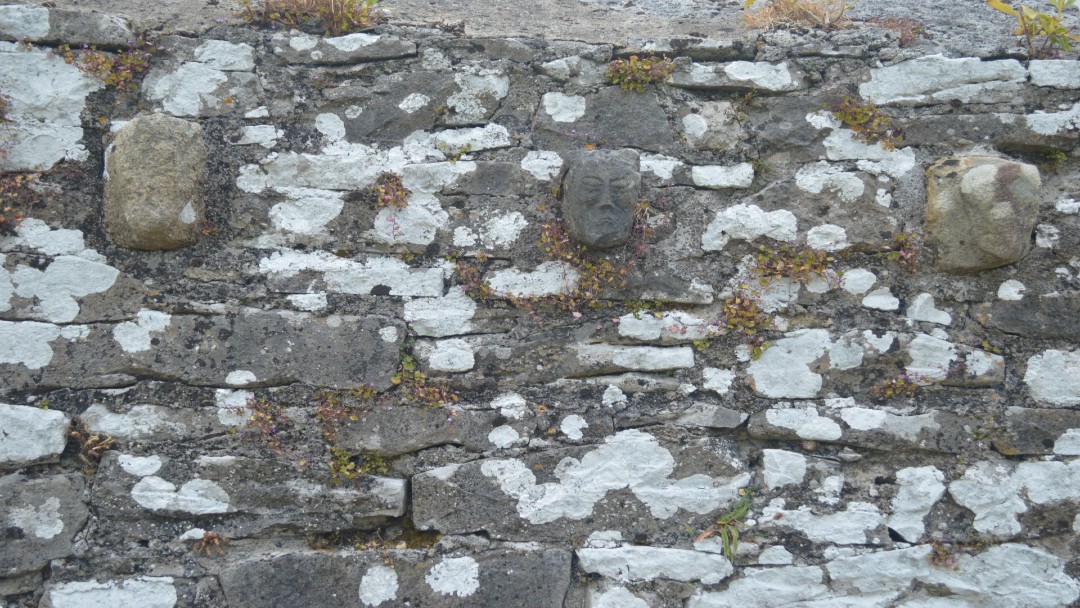 There are three Romanesque carved heads in the cemetery, said to represent Luchtigern’s disciples. A close examination of the middle head offers a clue to hair fashions in the fifteenth century. One is of limestone and two of sandstone, inserted into the south-eastern corner of the perimeter wall. These heads were originally placed over the lintel of a doorway in a small oratory that stood close to the church. This survived into the nineteenth century, as referenced by TJ Westropp.

The heads are closely associated with the Plague Stone story. When Luctigern challenged his three disciples about his miraculous healing gift and cure of the woman with the plague, only one monk fully accepted it. He is now represented by the intact head on the wall – the other two eroded heads signify the doubters.

An indication of how long the Fenloe site has been in use is seen in its graveyard. Here lie hundreds of stones placed at the head and the foot of the graves, without inscriptions.  Inscribed headstones did not come into popular use before the end of 17th century, much later in many places, so one can presume that many Fenloe graves are pre-17th century.

An old practice at Fenloe continues from an earlier era. When a coffin reaches the graveyard it is not carried directly to its final resting place. Instead, the bearers enter through the main gate and then exit at once through the side gate to the west. They move up the field about 60 metres where a coffin rest allows the coffin to be placed. It is then received into the graveyard from across the wall. There are all kinds of explanation for this – a tradition from the days when coffins were shouldered to graveyards, to avoid financial costs, to avoid moving in straight lines with the dead, to not rush the final journey. Whatever the explanation, it’s a venerable custom still maintained.

It is mentioned briefly in the National Folklore Collection in 1937: “When a corpse is to be buried in Fenloe Graveyard, they carry the coffin into the graveyard over the “steps” and not through the gate.” (The Schools’ Collection, James Clune, Clooney School, Volume 0593, Page 462). 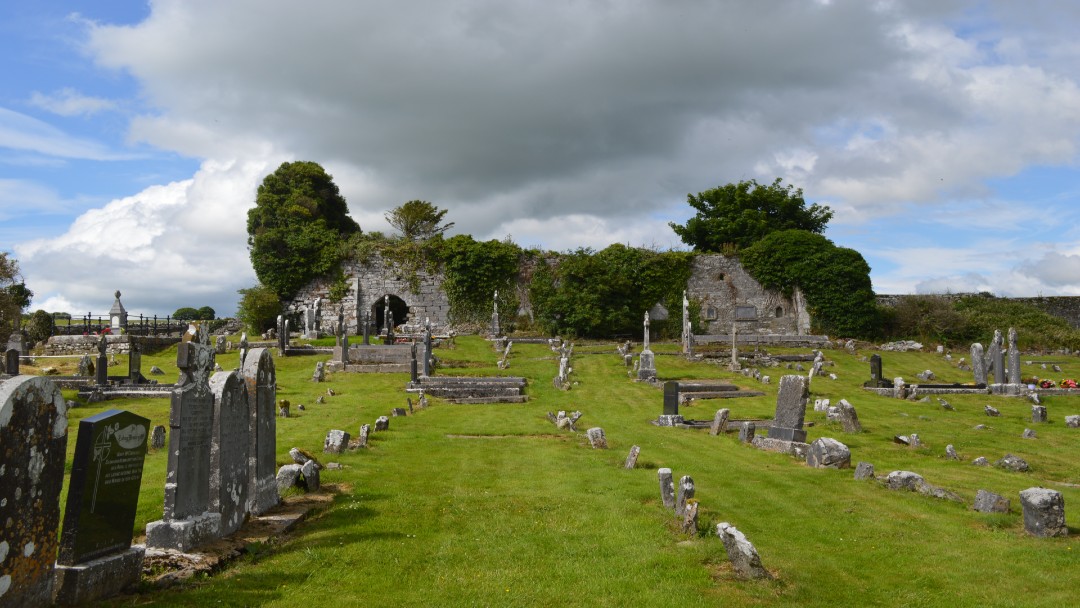 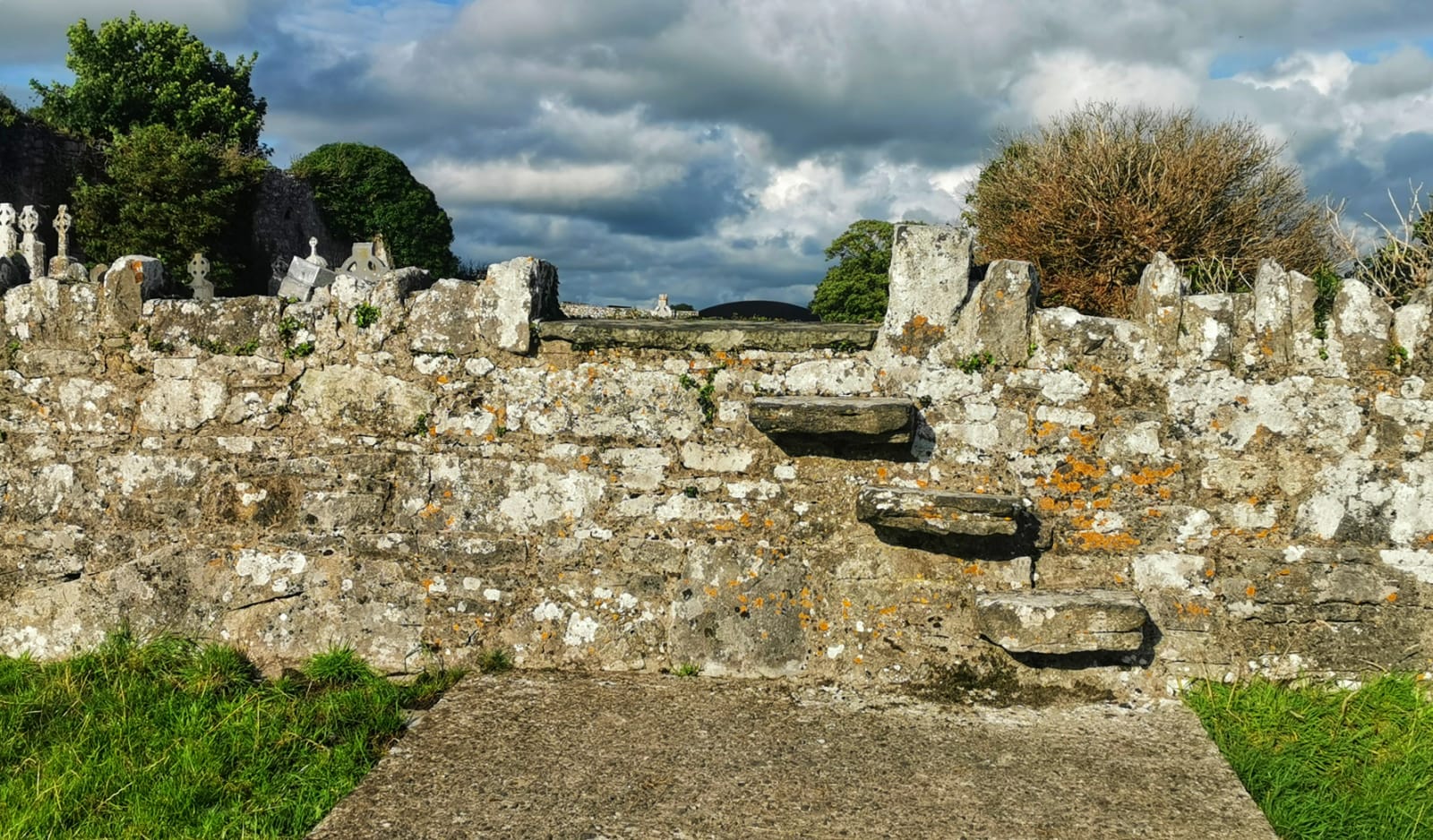 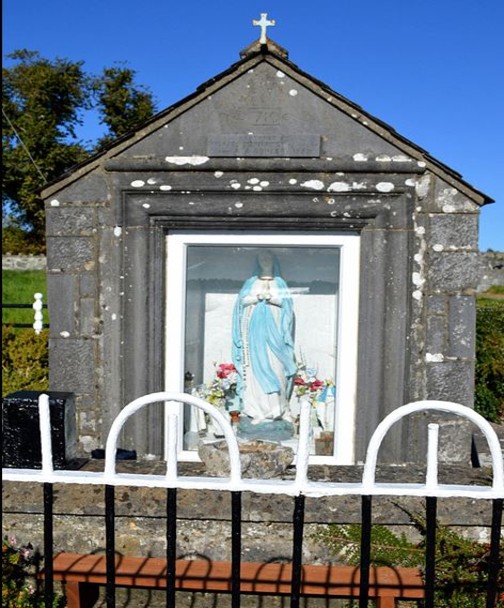 There is a Holy Well at the front of the Fenloe site. It is in two parts – the first is a basin well or bullaun that is now inserted in the wall. Below it is a spring, contained in a grotto-like structure, refurbished by locals in 1959. Both water sources are still much visited. They permit the visitors to take some of the graces of Fenloe home with them. 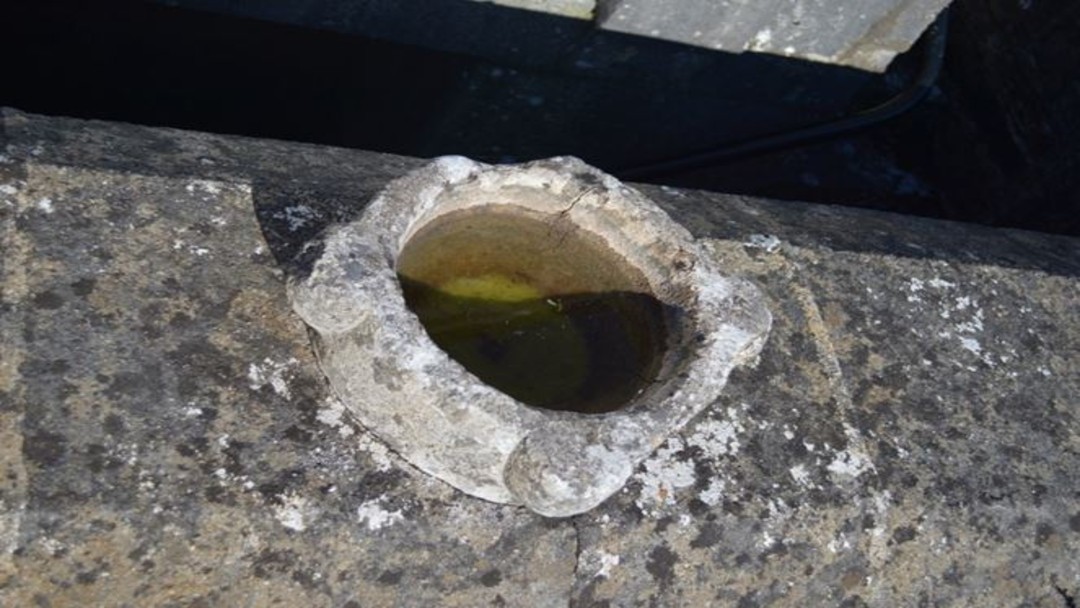 Footnote: Fenloe is both an ancient and fascinating site.  During high winds on the 10th January 2007, the east gable of Fenloe fell.It still lies on the ground. Age is now greatly undermining the church and it is in urgent need of attention. Recent attempts to determine who might attend to repairs have proven fruitless. It would be an enormous cultural loss to the local and national community if it were not preserved.