Quin Friary, better known locally as Quin Abbey, consists of a complex of buildings beside the Rine River, around which Quin village is centred. The Friary began construction about 1350, being built on the ruins of the Anglo-Norman Thomas de Clare’s large fortification. This was razed by the Gaelic McNamara’s in 1308. A Bull or edict of Pope Eugene IV given to the Franciscans of the Regular Observance in 1433 by Maccon McNamara firmly planted the Franciscans in the Friary. Maccon died the same year.

Over the following tumultuous centuries they maintained a presence in Quin until 1820. The Friary, which is one of the best preserved of its kind in Ireland, was in use until the 16th century. The local MacNamara clan were its greatest benefactors over the years. It was formally suppressed by King Henry VIII in the 16th century.

Following its formal dissolution in 1541, the Friary was granted to Conor O’ Brien Lord Ibricken, but he protected the friars, as did his son Tadhg after his death in 1548, though at this time it was described as “The precincts of the late house of Francis friars at Queyne in Thomond conteyninge 1 acre, in which is one great church now ruinose covered with sclate and stepill greatlie dacied, a church yard and cloister and 1 great haul, fower chambers, two cellars, and ruinous dortor, with an orchard and other edifices and also 1 watermill ruinose, and prostrate and ten cottages in Queyn village.”  In 1578 it was confirmed to the Earl of Thomond.

Suppression of some Irish churches seems not to have been as absolute as in Britain, so much so that Quin Friary was renewed about 1640. The building became a college, providing for hundreds of students. Oliver Cromwell’s forces arrived 10 years later, killing most of the friars and destroying the Friary. In 1671 the building was again restored, but never regained its former status.

In 1760, the friars were again expelled, although the last friar, John Hogan, remained there or nearby at Drim until his death in 1820, by which time the buildings had fallen into ruin. 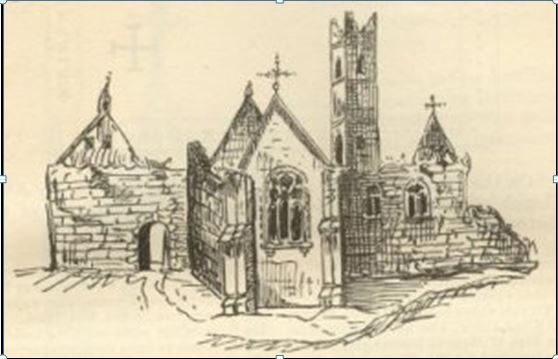 Perhaps the most traumatic event associated with the Friary was that in 1584 Sir John Perrot, Lord Deputy of Ireland, had Donnchadh Beag O’Brien, who had been harassing the English in County Galway during the Second Desmond Rebellion (1579–1583), half-hanged from a cart, his bones broken with the back of an axe, and hung, still alive, from the bell tower of Quin Friary.

Some Architectural features of Quin Friary

Three of the four bastions from the original castle are still in place and have been incorporated into the Friary structure. 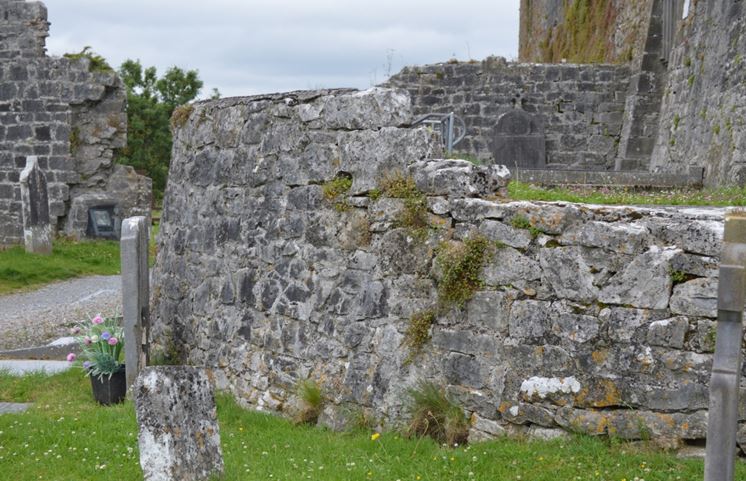 The south bastion at Quin Friary 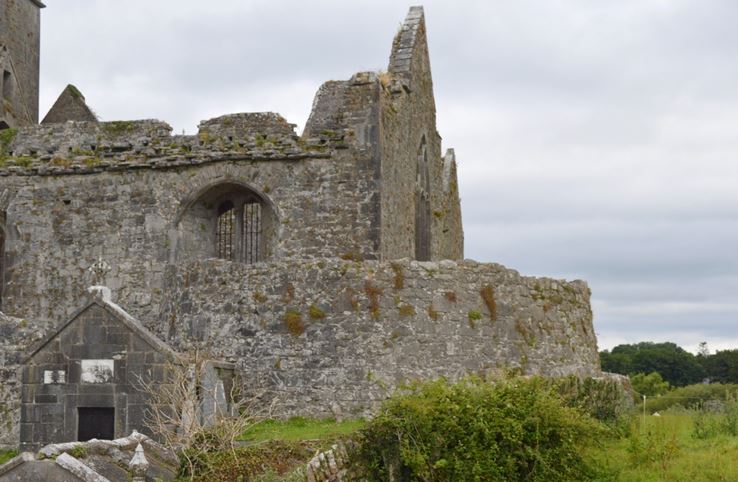 Remains of bastion to the south east 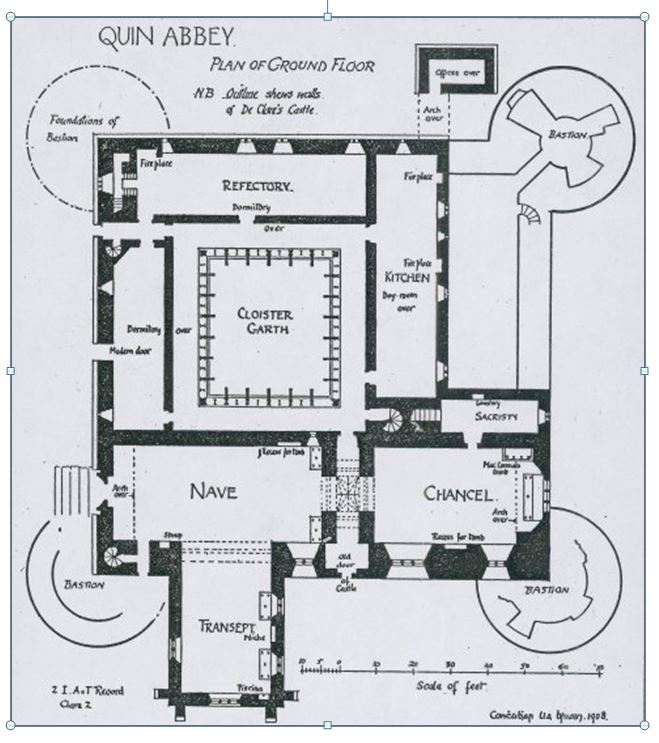 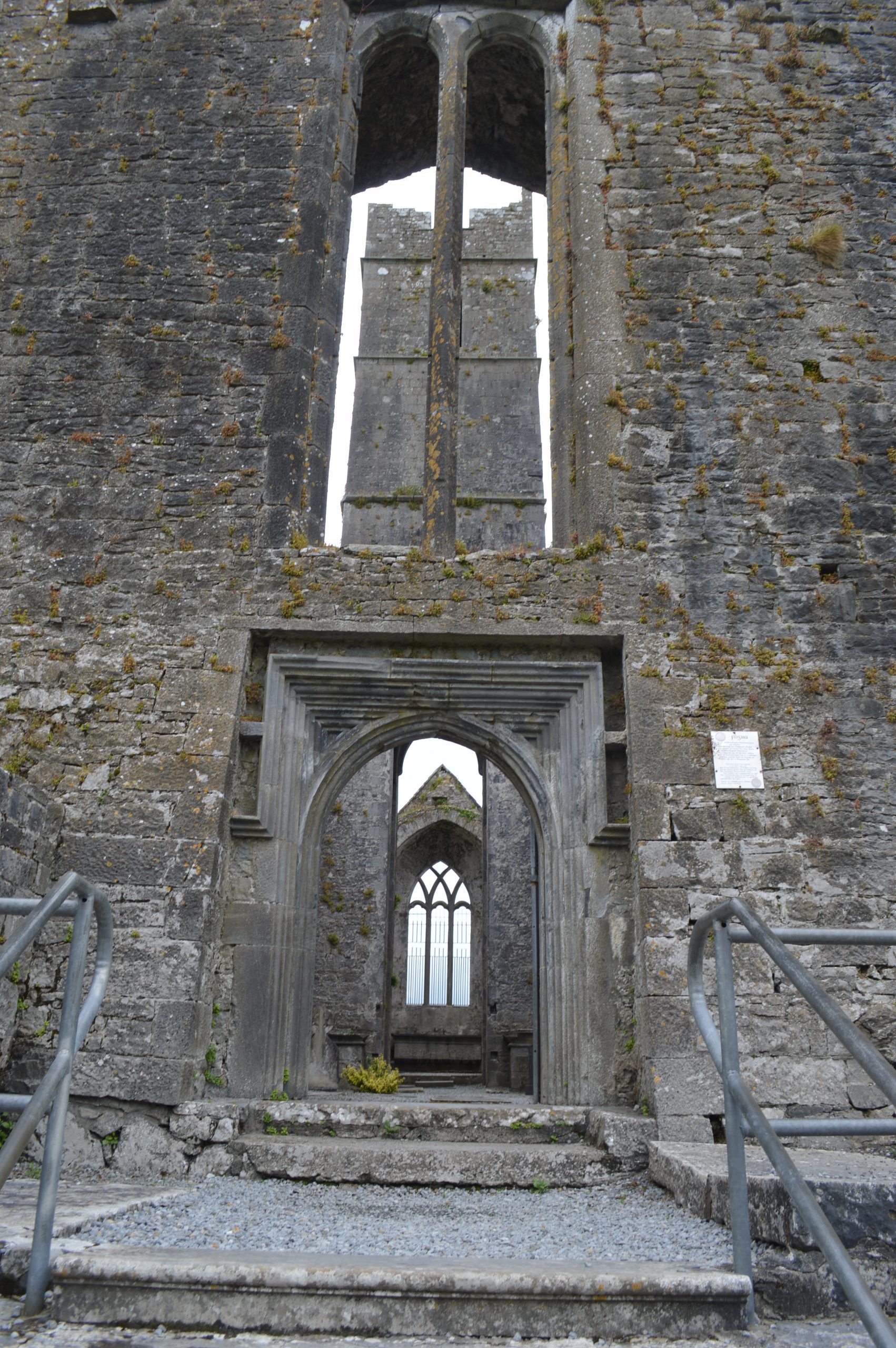 The entrance to the Friary is at the western end of the church through a round-headed doorway with graduated hood-moulding and a pair of lancet-windows above. 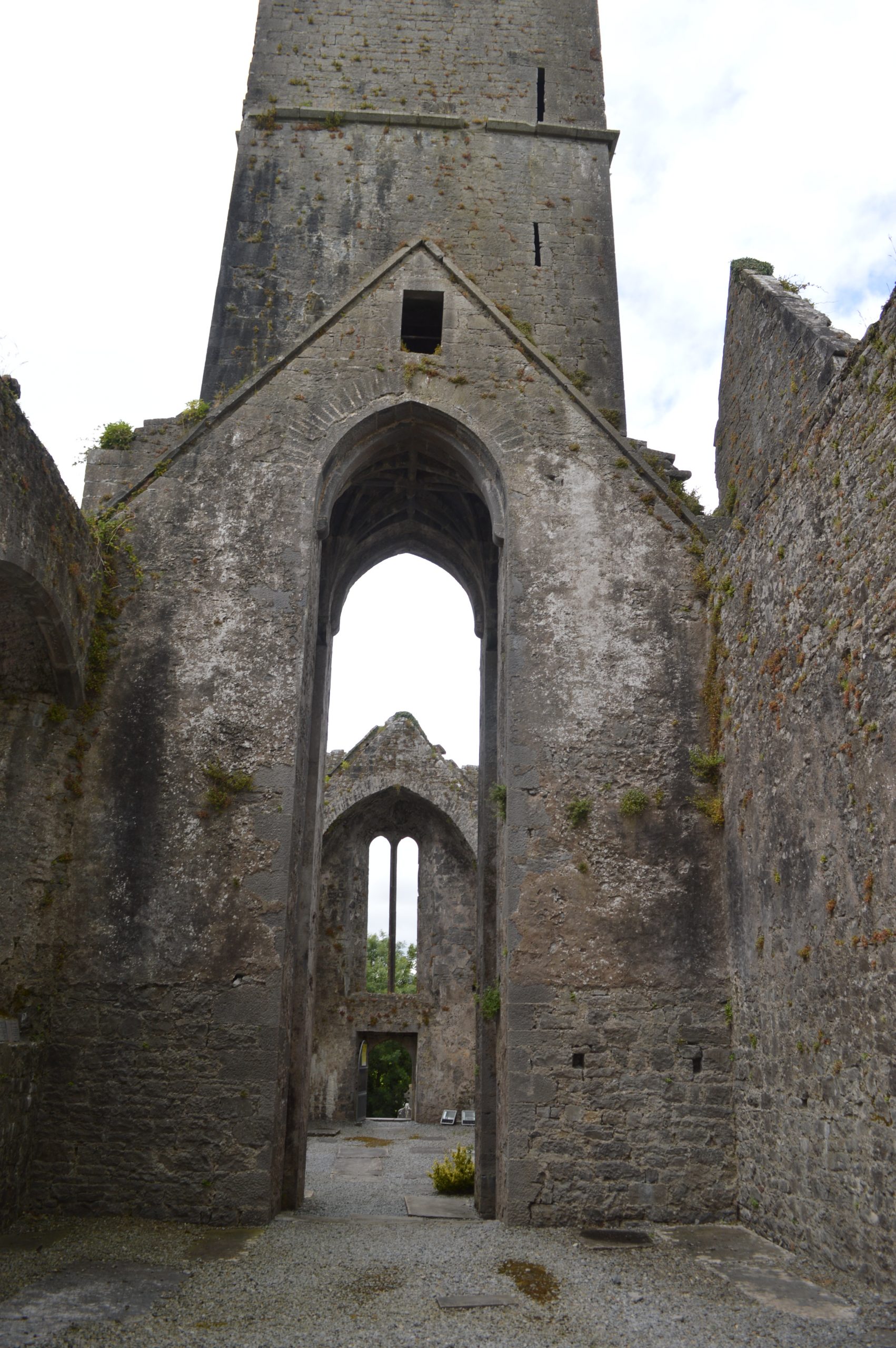 The underside of the tower has one set of tierceron (secondary) ribs and holes for the bell ropes. The south and east walls are unusually wide (2.8m) as they utilise the foundations of the earlier castle. 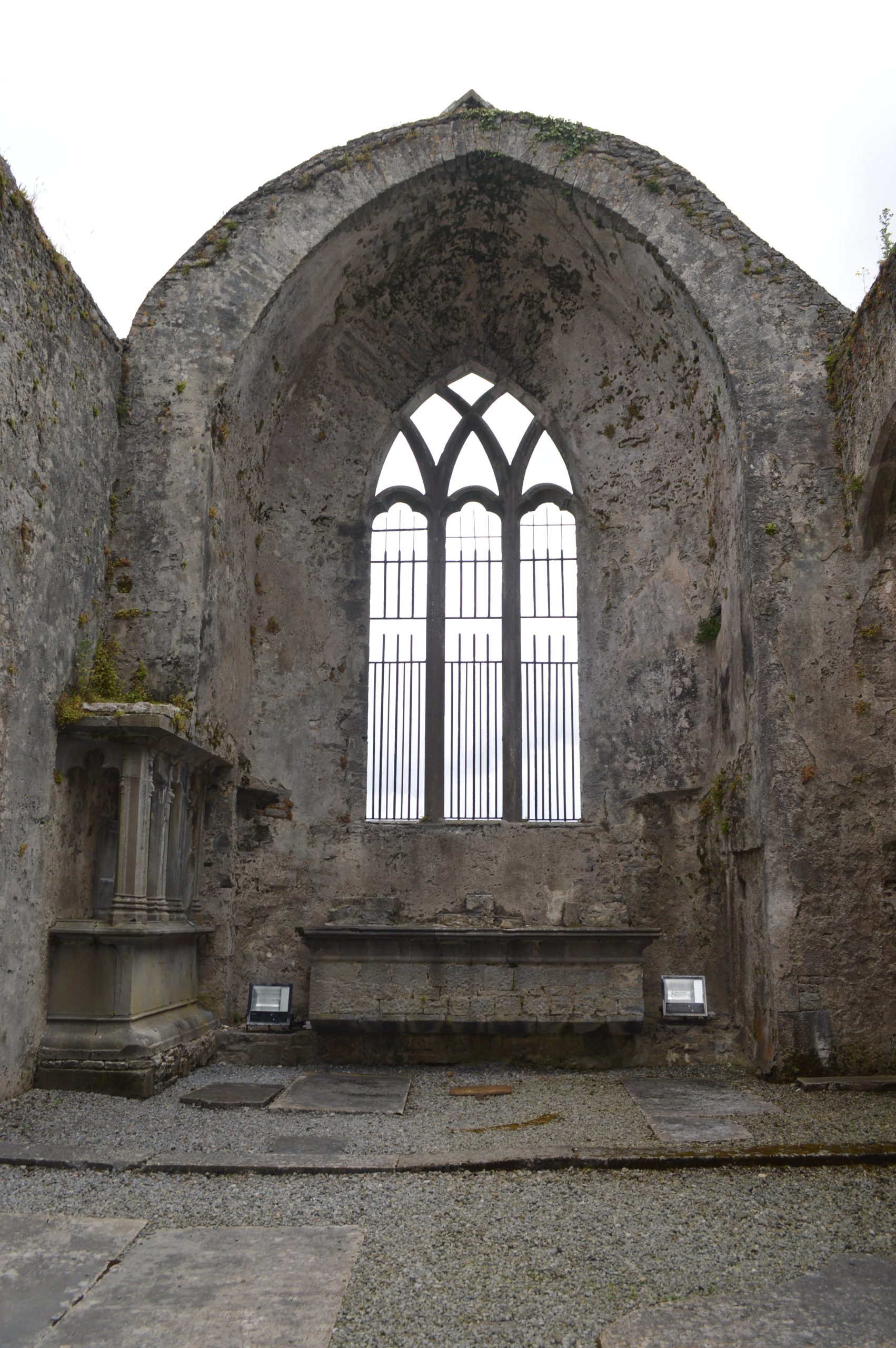 The remains consist of a chancel at the south with a transept added to the south wall and a sacristy north of the chancel.The original high altar is still in place under the east window.

The grave of Hugh MacNamara, at the left of the chancel.

The Sacristy is at the north side of the High Altar. 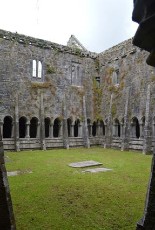 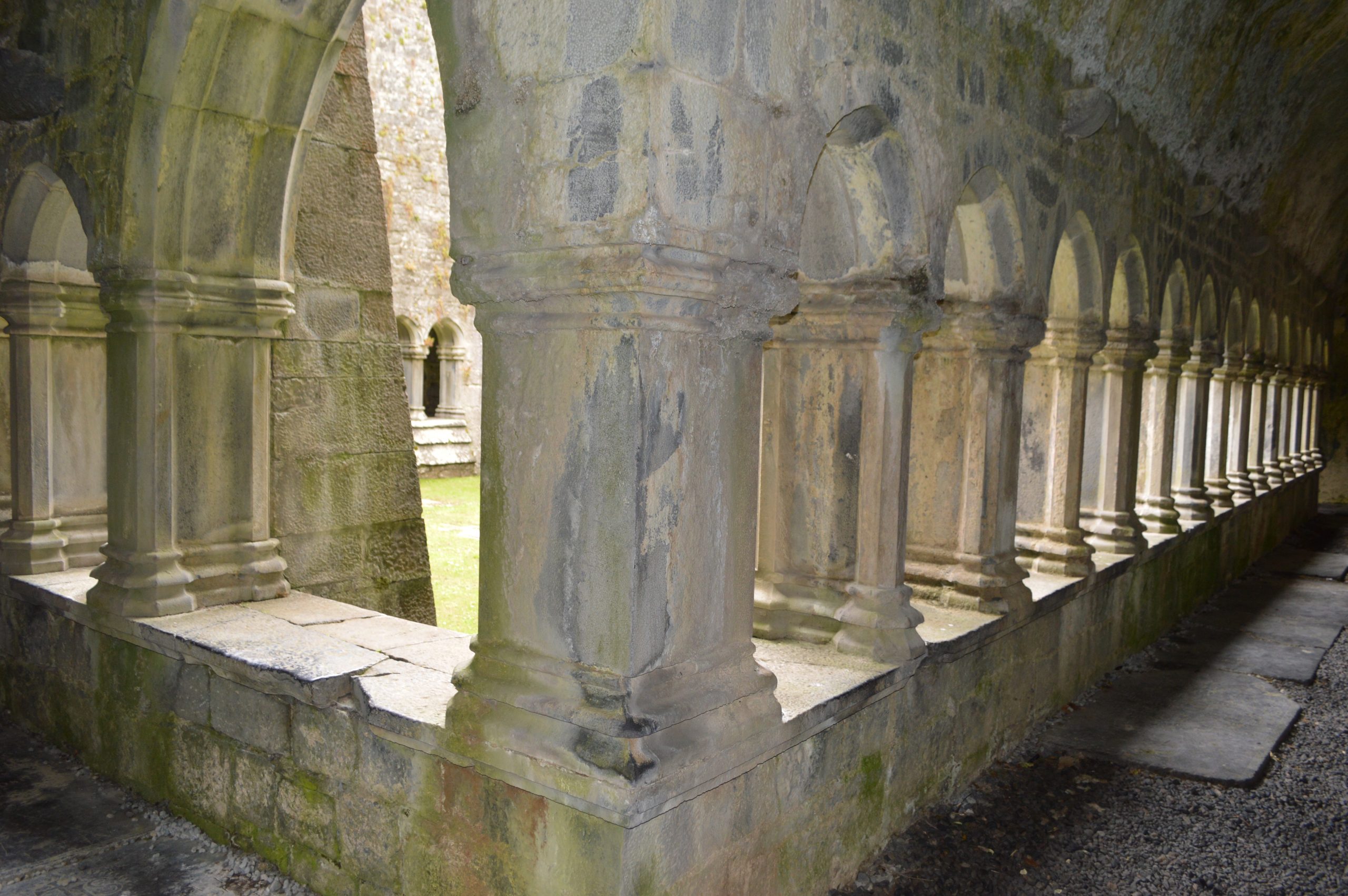 The magnificent cloister lies to the north of the nave. 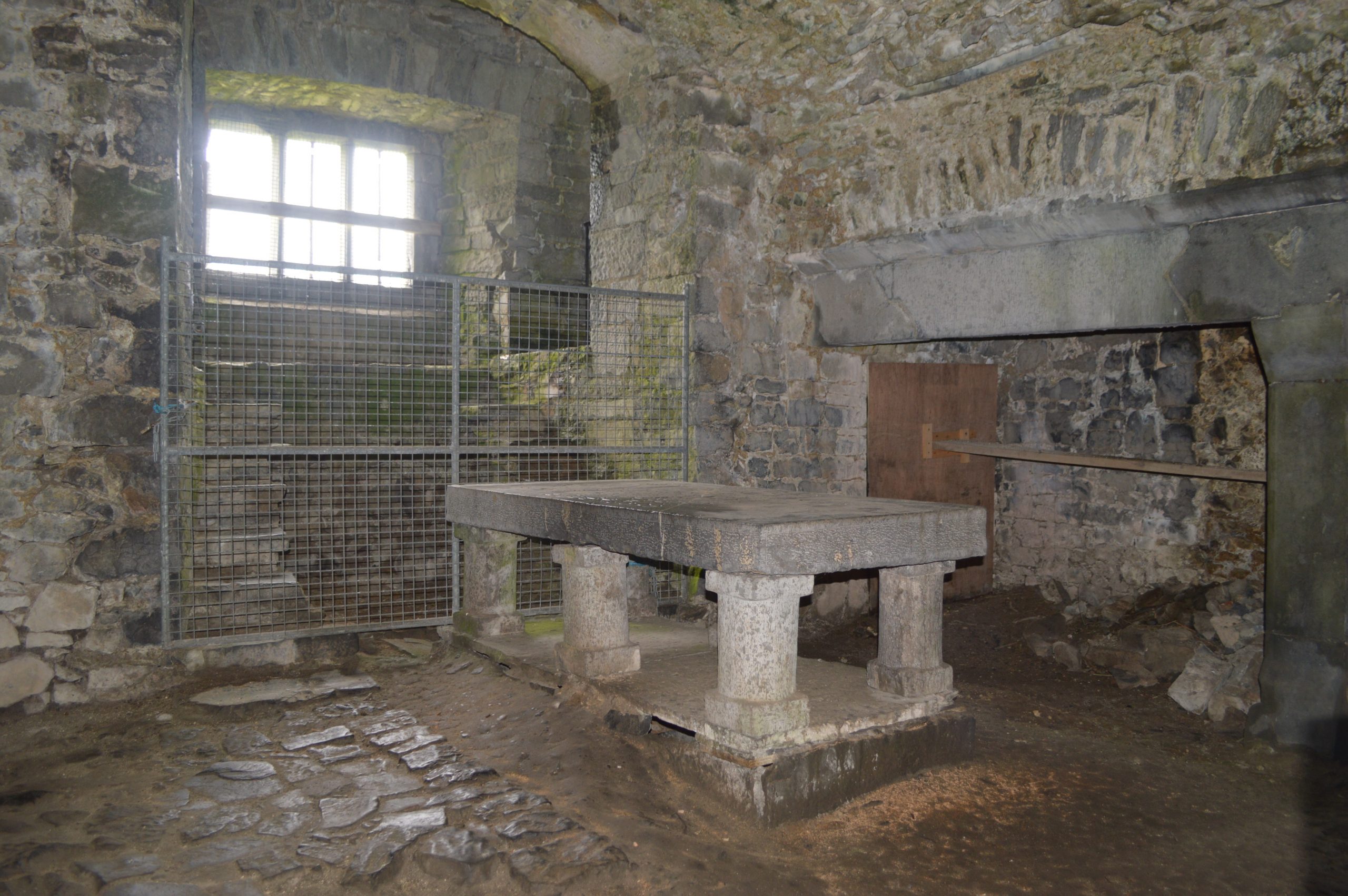 The refectory, showing s stone table and large fireplace. At the window are steps and a raised platform where a friar would read from the gospels while the others ate. 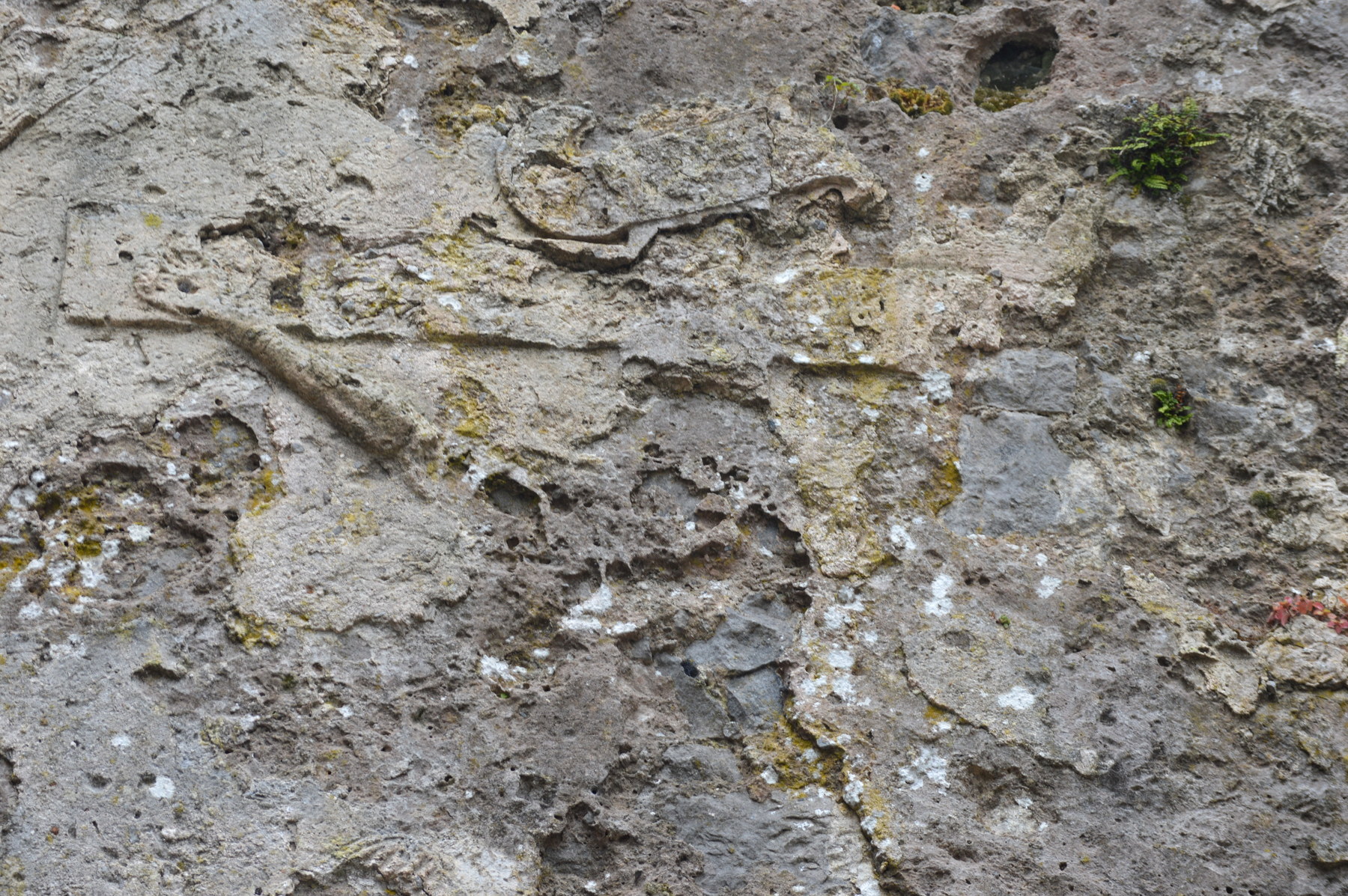 A sedilia or tomb niche on the south wall of the chancel is surmounted by traces of a 17th-century stucco crucifixion scene. 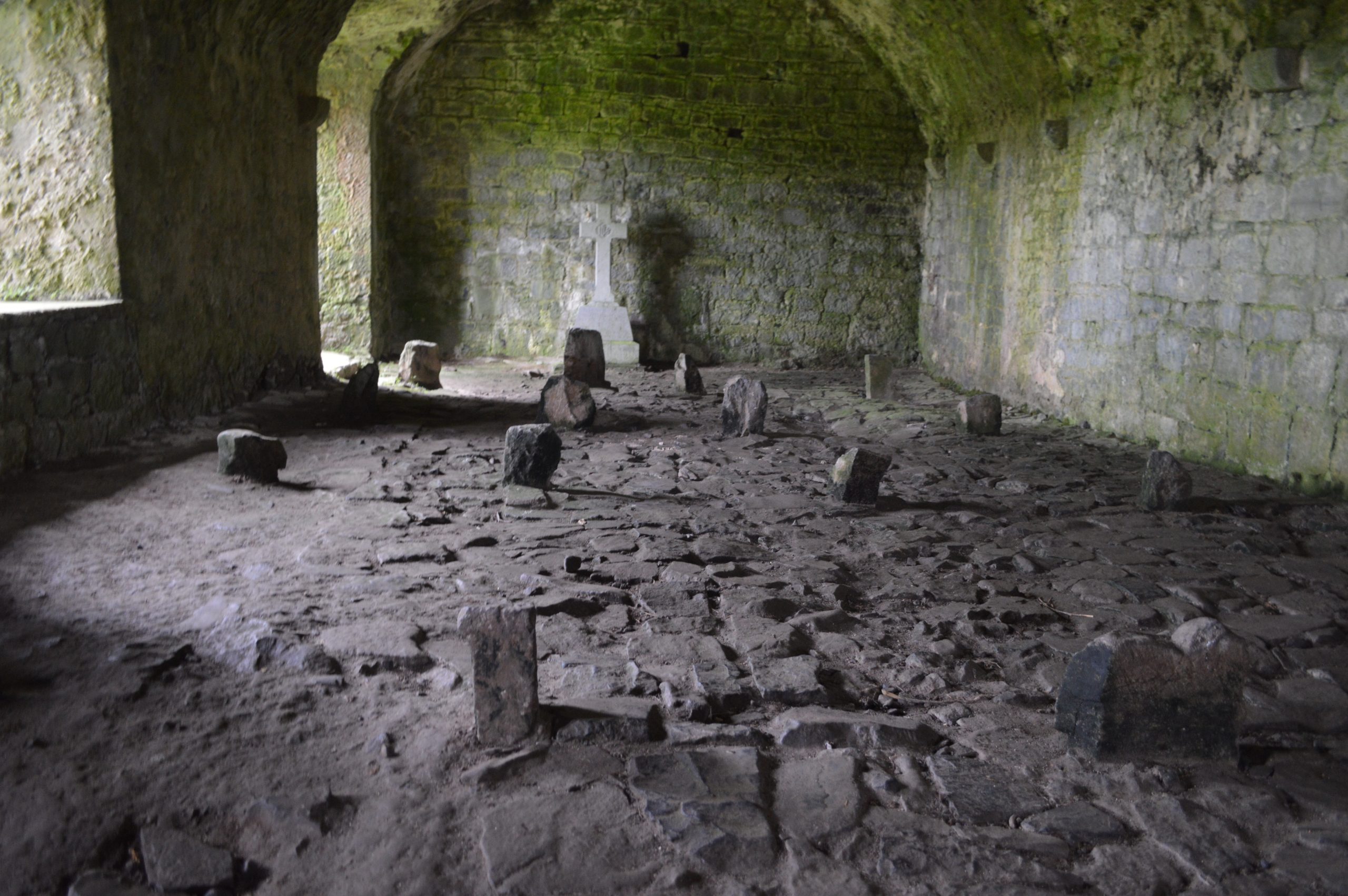 The upright stones are likely remains of stones legs from tables. 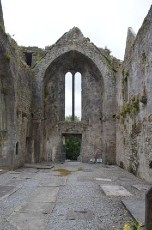 A gallery in the west end of the nave, evidenced by corbels, gave a privileged vantage point to guests staying in the west range of the Friary.

The grave of John ‘Fireball’ MacNamara, last of his clan, in the south transept.

Much more can be written about Quin Friary. This article is intended as a part of the extraordinary story that this ancient building, first commenced in the thirteenth century, has to tell.

The Friary is open every day during the summer. It is well worth a visit.