This article is on Denis O’Duffy of Maghera, Clooney Parish, a very keen Nationalist and Champion of Ireland’s rights.  He left his native County in 1798, and took part in all the leading struggles in Wexford and Wicklow. He fought at Vinegar Hill and played a major part in the Battle of New Ross. He escaped to the Wicklow Mountains after the Battle of Vinegar Hill and headed for Co. Clare.  On his way he was accosted by a group of Yeomen. He challenged their Captain to a duel and soon had him begging for mercy.  O’Duffy was released and returned to Maghera.  Soon afterwards O’Duffy left Ireland and joined the Irish Legion under Marshal McMahon who was fighting with Napoleon in France.   It is said he is buried in a Military graveyard outside Paris.

A Memorial Monument in his honour was unveiled on Monday December 26th, 1898 at Clooney Graveyard, prior to a public meeting at Clooney Cross where thousands attended according to the article in the Clare Journal.

We include a collection of articles and leaflets honouring Denis O’ Duffy including part of the article which appeared in The Clare Journal of December 1898. It details the unveiling of the Monument and the public meeting at Clooney Cross afterwards, as well as copies of the Information Pamplets from the 1998 and 2001 commemorations with photographs taken on both days.  Finally, we include an article on the monument which was published by Hilary Gilmore in The Other Clare Vol. 22 on Monuments in Clooney Graveyard.

UNVEILING A MONUMENT TO A ’98 MAN IN CLOONEY

On Monday, the little village of Clooney, midway between Ennis and Tulla, was the scene of a remarkable demonstration, when a monument erected by the public subscriptions of Clare Nationalists in commemoration of a Clare man, Denis O’Duffy, who left his native county in 1798, and took part in all the leading struggles in Wexford and Wicklow, was unveiled amid a scene of much enthusiasm.  The memorial has taken the shape of a very handsome shaft of limestone, surmounted by a Celtic cross.  On one side of the pedestal is the following inscription: – “To the memory of Denis O’ Duffy, of Maghera, Clooney parish, who was ever a trusted and faithful champion of Ireland’s rights, and fought at Vinegar HILL, The Year of the Rebellion, 1798, this monument has been erected by the Brian Boru (Clooney) Club and every staunch Nationalist of Clare and elsewhere, Dec., 1898,” and on the front are the words, “Dulce et Decorum Pro Patria. God Save Ireland.”  The Monument has been finely executed by Mr. David Clohessy, Ennis, and is a handsome specimen of native skill.  To the Clooney Brian Boru ’98 Club is due the credit of having initiated the movement, which culminated in Mon day’s demonstration, and to Father Kennedy, the zealous and patriotic C.C. of Quin and Clooney, and Chairman of the Memorial Committee, a special word of praise is due for his wonderful exertion in organising the memorial.

The ceremony of unveiling took place prior to the public meeting.  In the unavoidable absence of the Ven Archdeacon Murphy, P.P. V.G. Quin, the duty of undraping the monument was entrusted to Father Kennedy, amid loud cheers.  In the course of his remarks he thanked the men of Quin and Clooney for the honour they conferred on him in asking him to unveil the beautiful and artistic monument to the memory of a ’98 patriot and gallant Clare man.  Denis O’Duffy was a faithful and trusted champion of Ireland’s rights.  He was unable to successfully accomplish his aims in his native county, and he went to the seat of war in Wexford and joined his countrymen for faith and fatherland against a cruel and hostile Government.  He returned unconquered in spirit but a wounded soldier from the combat.  Down with the black flag which veils the monument to his memory.  Up with the green flag which adorns it, and ere long that green flag would be waving triumphantly not only over the monument, but over their own Parliament House in College Green (loud cheers).  He asked them to show that they feared not to speak of ’98 by giving a hearty cheer for the brave heroes of ’98, (cheers).

The article then lists who was there from various parishes, including Quin and Clooney:

The rev. gentleman, on coming forward, was greeted with prolonged cheering.  He thanked them for asking him to preside at that vast and important meeting. During the past twelve months, in every corner of Ireland, a move had been made to do honour to the brave heroes of ’98, who rose in dark and evil days to right their country’s cause (cheers). It would be too bad if the brave men of the Banner County did not do their part in this good and patriotic work, and so Clare men had assembled there that day in their thousands to honour a brave patriot, Denis O’ Duffy (cheers), and on behalf of the Memorial Committee and his parishioners he would bid them a céadmílefáilte.

The above extract from The Clare Journal is only a part of the article which appeared.  If anyone is interested in the full article they can contact Ann McNamara who has a copy of it and will gladly share. 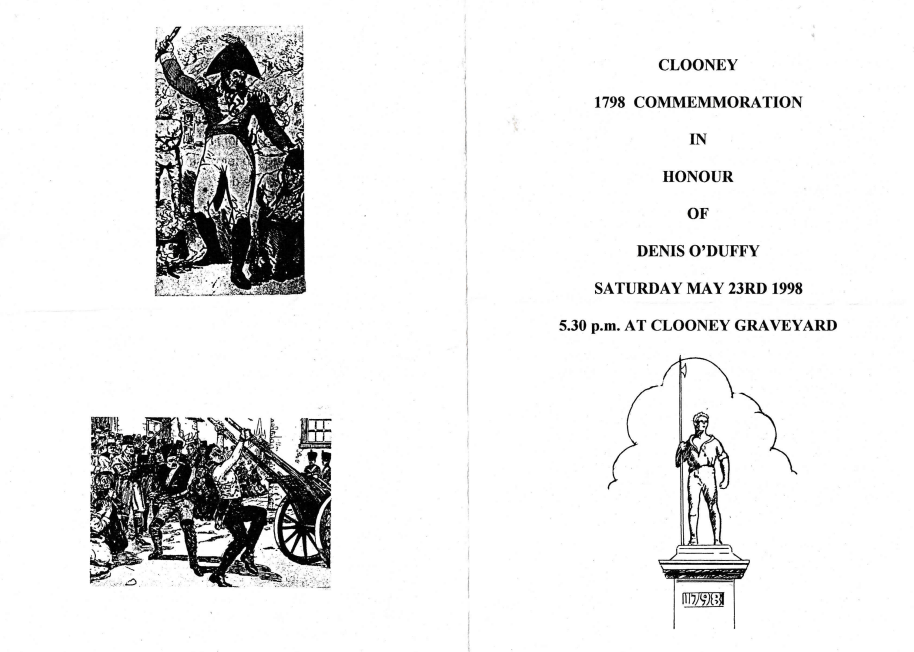 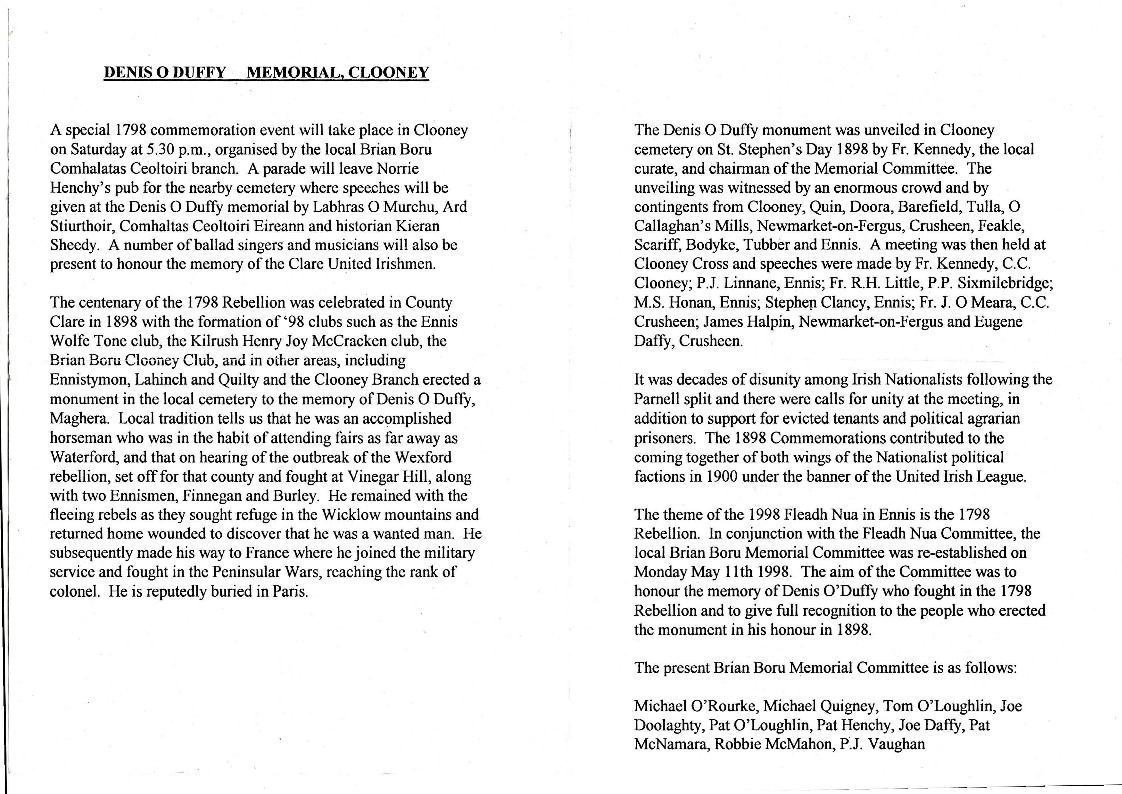 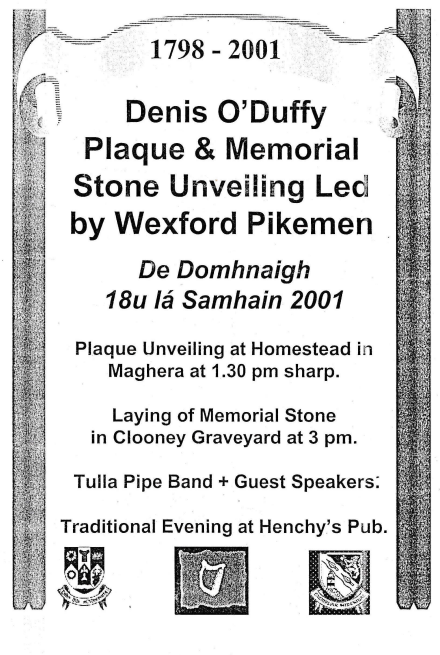 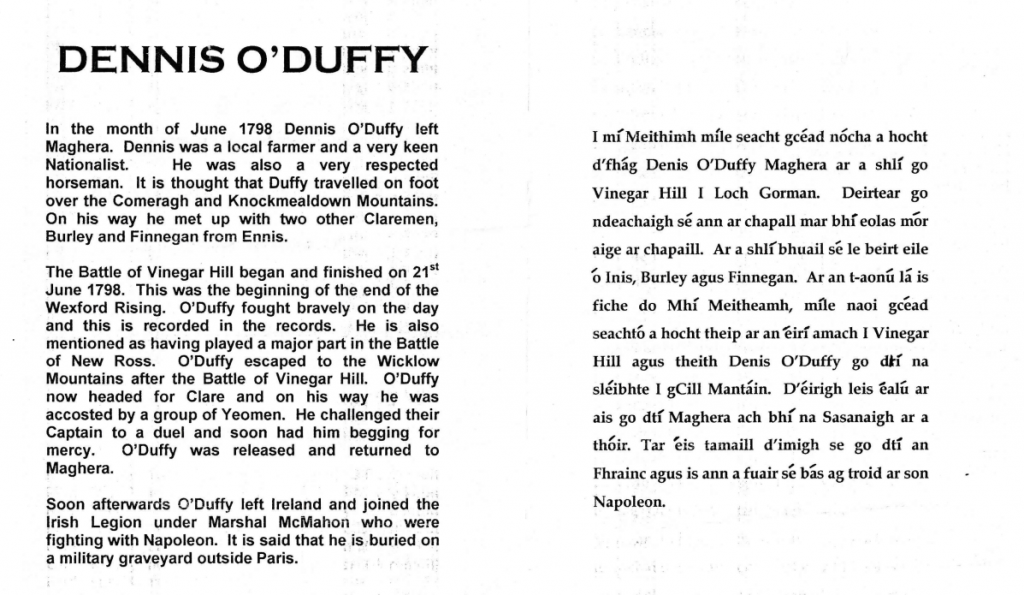 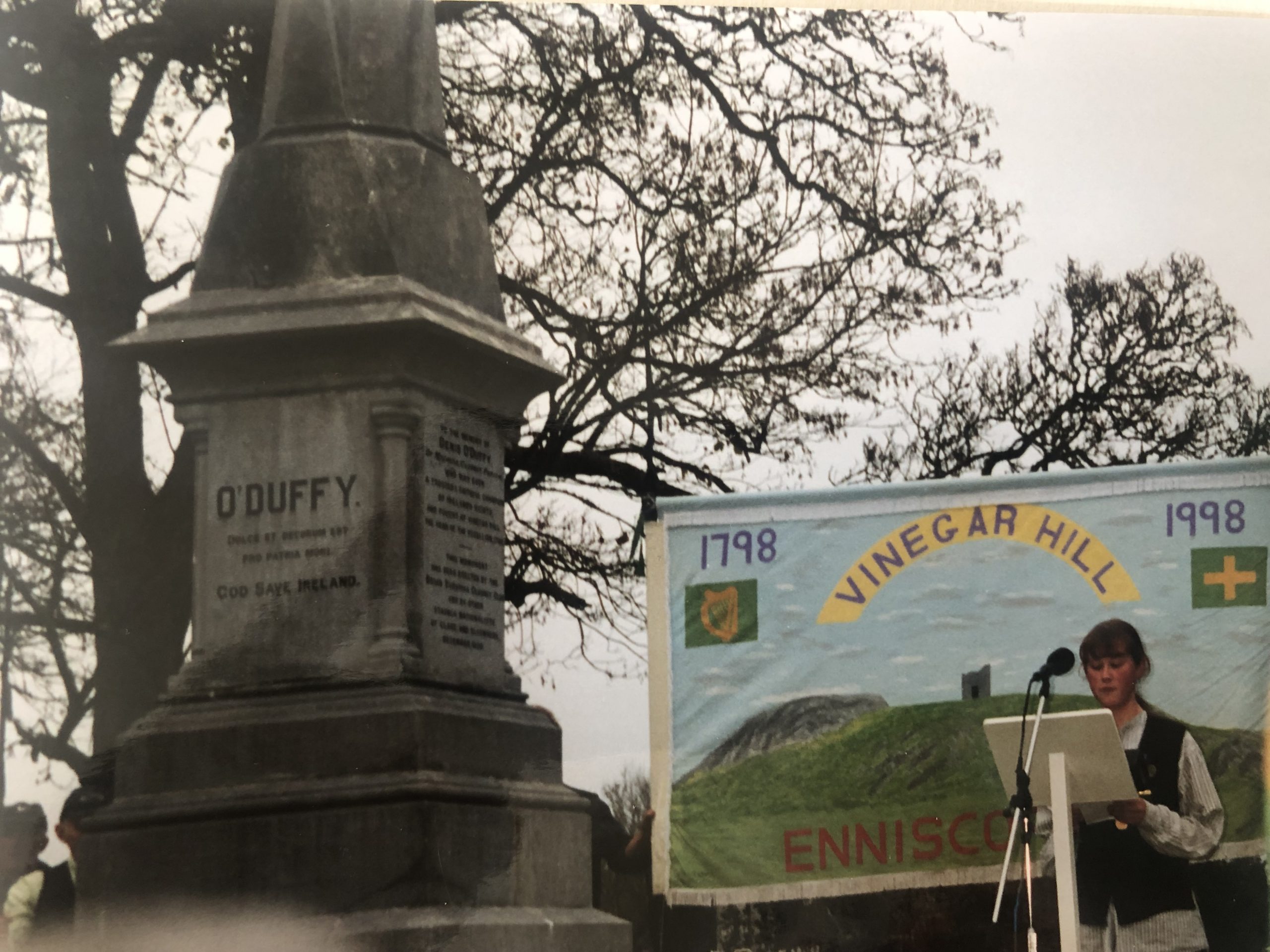 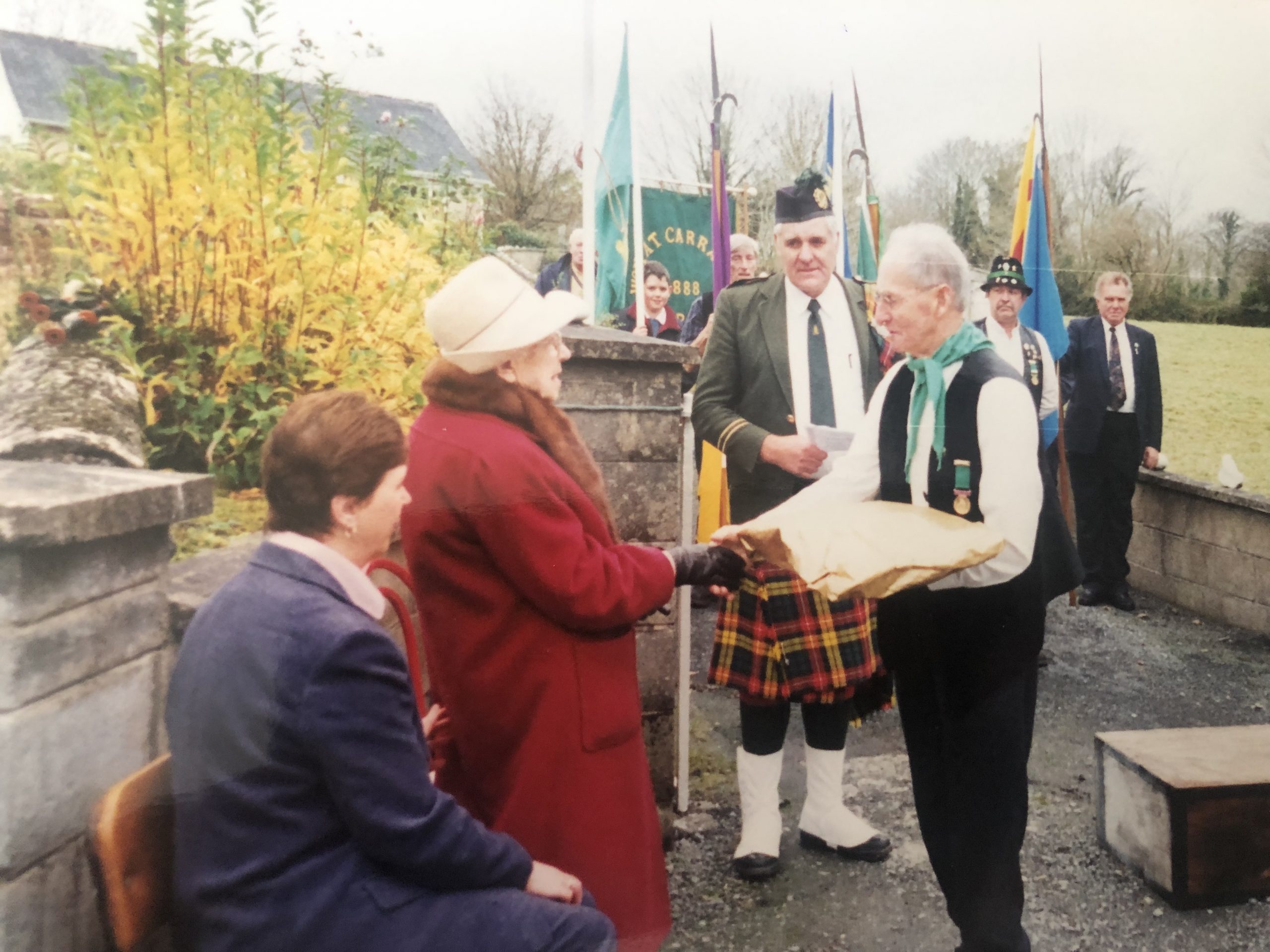 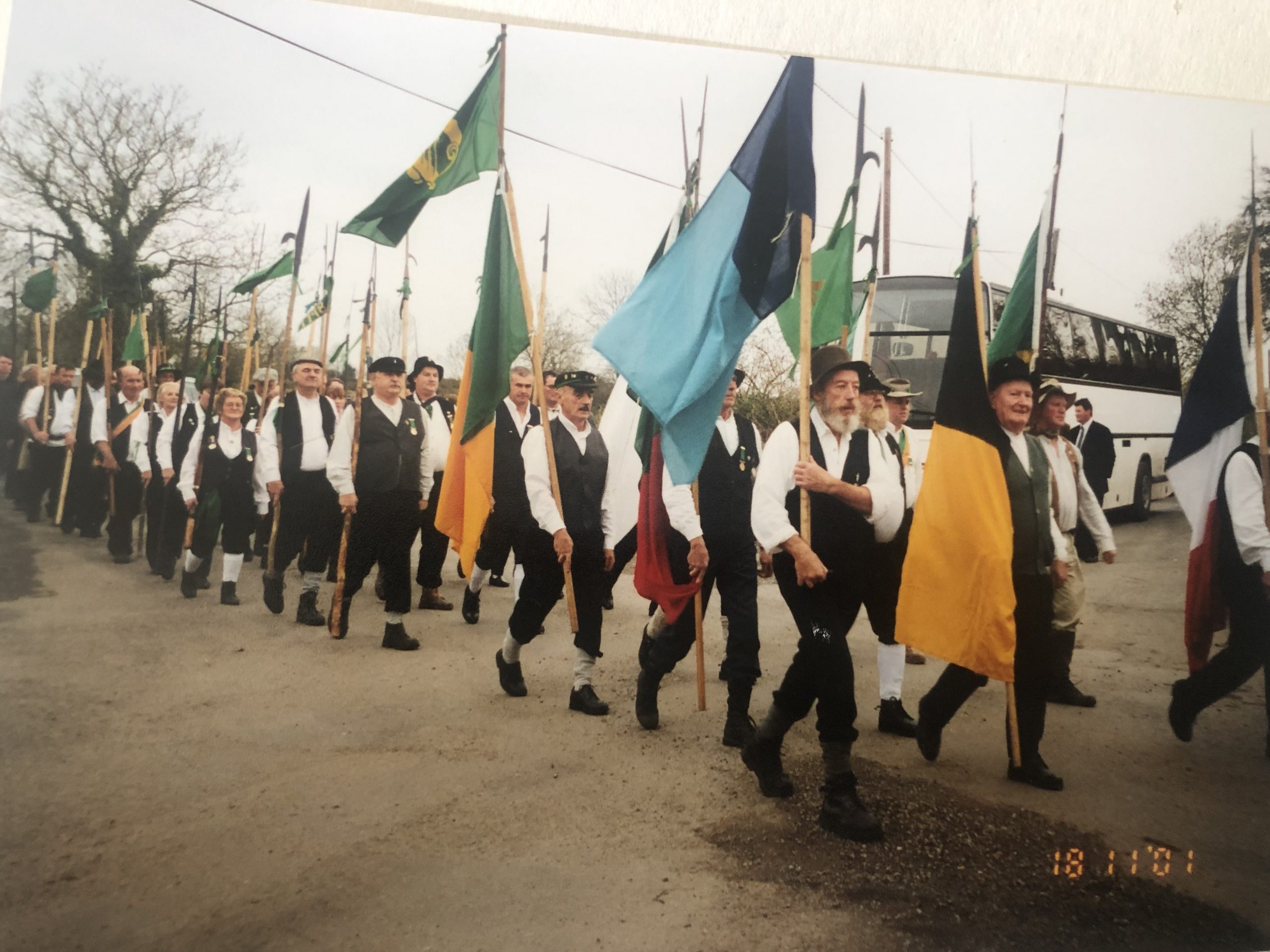 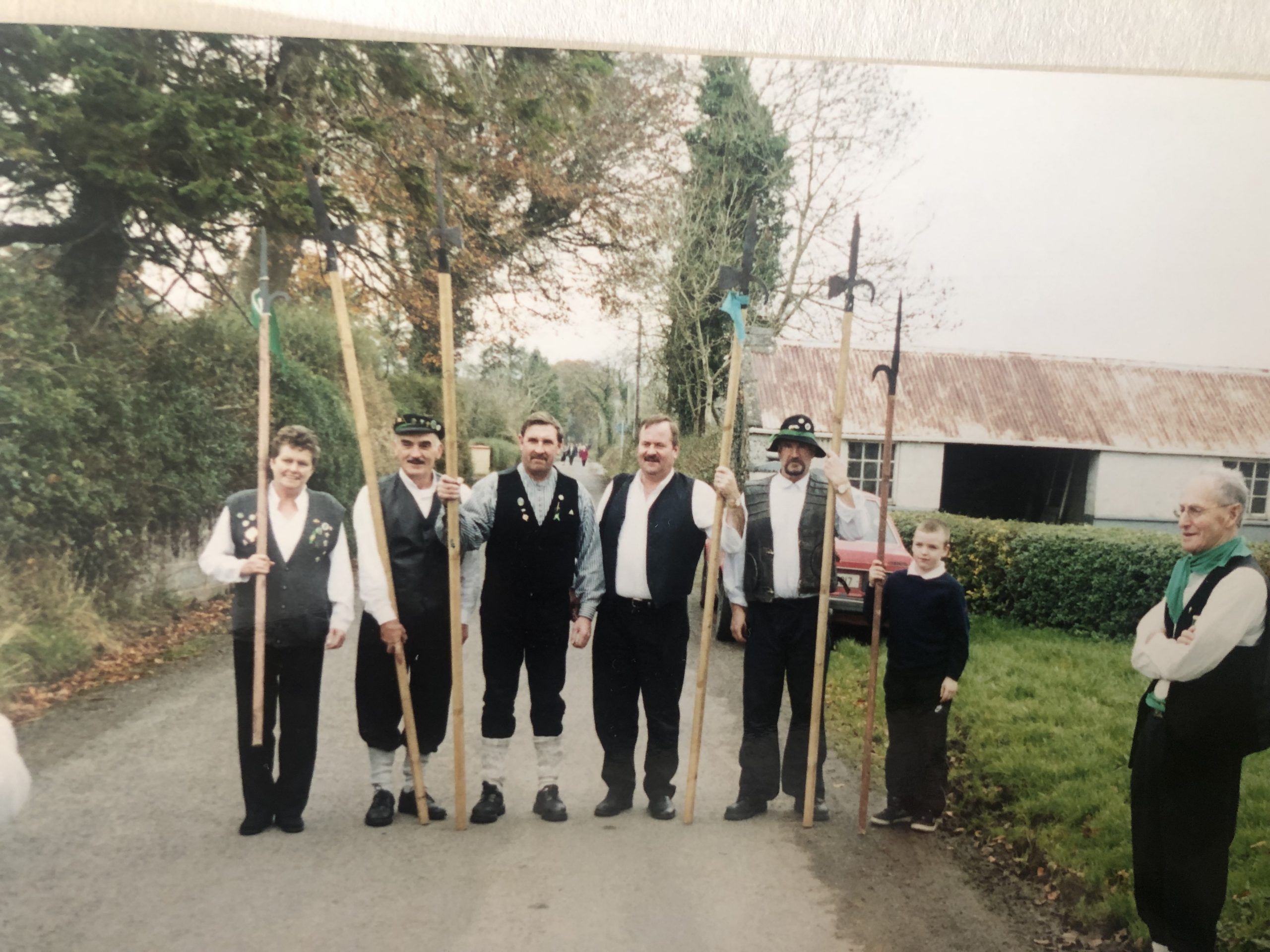 Hilary Gilmore writes about the Monument in The Other Clare Vol – 22 1998.

In the proceedings of the Royal Irish Academy, 1900, T.J. Westropp records that part of the church dates from the 15th century, and the founder was traditionally Rikin or Brecan c.500. ‘Cluaine’,‘Clony’ 1302.

To the west of the pointed south door is the
limestone memorial erected to commemorate Maghera man Denis O’Duffy “who left his native county in 1798 and took part in all the leading struggles in Wexford and Wicklow” (Clare Journal December 28th 1898).

It was erected by the public subscriptions of the Clare Nationalists, and ‘ unveiled on Monday December 25th 1898 by Fr. Kennedy c.c. of Quin and Clooney, Chairman of the Memorial Committee. 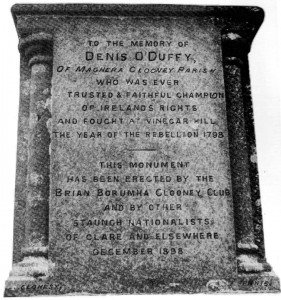 Details of inscription on O’Duffy Memorial.