The Great Fair of Quin

This short essay offers a background to the once all-important cattle fairs of rural Ireland.The second part uses the reminiscences of Quin locals 1937 Folklore Collection,to build the story of ‘the Great Fair of Quin.’

Background:The November fair in Quin was once the main commercial and social occasion in the village. The Fair Green, where animals were assembled for buying and selling was on the far side of the village in the townland of Feaghquinas one heads towards Kilkishen. The fair was once managed by the Singleton landlords, who collected the customary tolls at the time. With their departure, the Fair Green came into the ownership of Vincent Hassett. 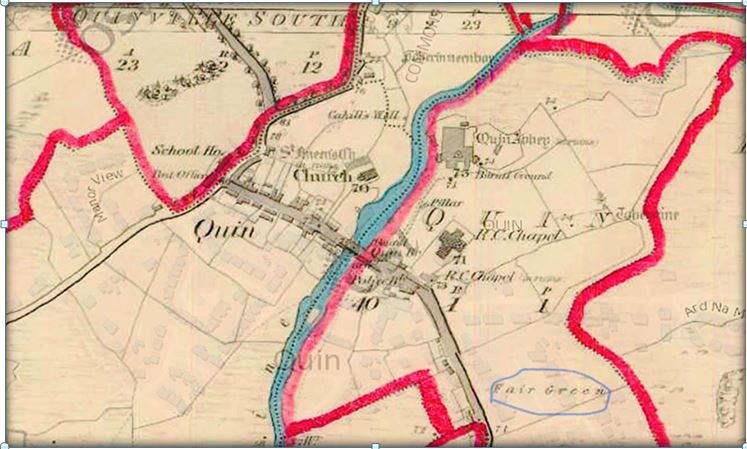 Quin’s Fair Green in at bottom left of map

On fair mornings farmers and their families waitedwith their livestock on the green for buyers and the start of dealing. For the farmer, the fair was almost his sole source of monetary income and a chance to get some reward for the labour of a year’s work. Consequently it was an occasion of intense bargaining, as he competed against the slippery ’jobbers.’ Having sold his livestock, the farmer settled outstanding debts, making payments to shopkeepers and stocking up on goods for the coming winter. Then once business was transacted perhaps a chance for a few well-earned pints. All of the village gained from the presence of a successful fair.

Throughout the eighteenth and nineteenth centuries, the English crown continued to dispense fair patents. After the lifting of the embargo of cattle exports to the U.K. in 1765, cattle rearing increased significantly and by the 1800’s thousands of Irish animals were reaching Port Patrick, Scotland. The Napoleonic Wars created another huge need for Irish agricultural produce in the early nineteenth century. With the advent of the agrarian revolution and the imports of feedstuffs which made it possible to maintain animals over the winter months, farmers were better placed to renew rearing and development of stock the following year.

During the nineteenth century fair dates were distributed across the year. Monthly fairs became quite common in the larger country towns after the famine. May and November were the months of the great cattle fairs, while the spring fairs of February and March were mostly for horses and ‘hiring’ fairs at the start of the agricultural year. Tolls were levied on those doing business at fairs and collection was usually in the hands of local individuals.

This multitude of fairs and markets throughout the land began to meet more than just the direct commercial needs of country folk. While cattle were the mainstay, surplus goods such as butter, poultry and turf also found an outlet. Specialised items such as tobacco, spirits, matches and clothing could be purchased. Itinerant tradesmen, including tinkers and tinsmiths made abundant use of these gathering to sell their services and wares rather than trying to reach isolated homesteads and small communities. 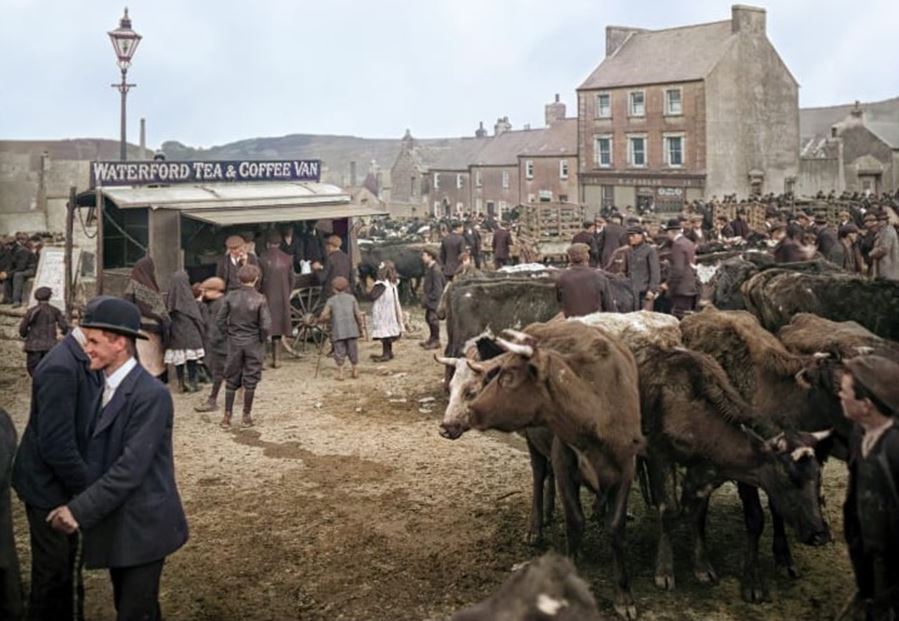 A town fair in Ballybricken, Waterford, in 1910(Courtesy of Merrion Press) showing the numbers of animals present and the many activities generated by the fair

Throughout the west and south of Ireland farmers depended greatly on cattle to provide an income. While some cash crops were sown, the vagaries of Irish weather and, in many cases, small holdings and marginal land rarely allowed farmers to survive without the income derived from the sale of livestock. Small farmers sold cattle, sheep and pigs to outside buyers from Cork, Limerick and the midlands to generate important cash. These buyers or jobbers were well known throughout the country and struck a hard bargain.

It formed an important part of any young farmer’s initiation to ensure a good deal was struck when haggling with these experienced dealers. Many farmers enjoyed the immediacy and drama of a good haggle to get the best price for their animal. A similar number of farmers despised the cattle dealers as they often felt short-changed by them when they had little option other than to sell for the offered price.

Not alone was the difficulty of getting a good deal the only challenge. Animals were frequently walked long distances to the fair, losing weight along the way. A sale was imperative to avoid a return trip home with the stock. Tolls were charged and in some places where controls were lax they became excessive.Such was the dislike of the toll levy and the pervasive abuse of the system that it had been abandoned in the east of the country by the 1850’s but continued much later in the west and south.[1]

In the twentieth century the development of the indoor auction mart and motor transport meant that much of the ritual and excitement of the old cattle fairs has disappeared. Now cavalcades of tractors and horseboxes can be seen making their way to the Ennis Mart on a Thursday.

The first recorded faction fight according to O’ Donnell in his book ‘The Irish Faction Fighters’[2] is said to have occurred at Clonmel in 1805 between two warring factions, the Caravats and Shanavests, following the hanging of a certain Nicholas Hanley. The practice quickly spread and soon fights became a regular feature of fairs, assemblies, race meetings and feast day gatherings, usually having first been agreed by both parties. In spite of the presence of an RIC barracks in Quin, faction fights at fairs were not uncommon. 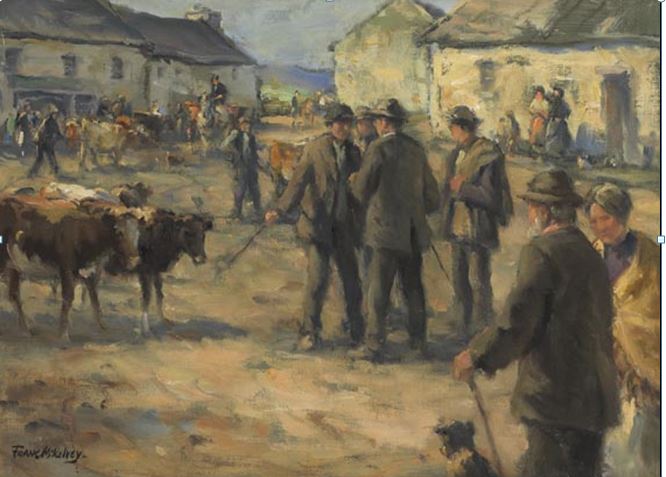 The following local accounts are taken from the Schools Collection taken up across Ireland in 1937-38.

‘Fairs were always held in Quin on the 7th of July and on the 1st of November. There is a field in Quin known as the Fair Green of Quin. There are more fairs held in Quin nowadays than were long ago. Six or seven years ago two extra ones were made, one in January and one in February.

From Mary Clune as told by Mrs Clune, Ballymacloon North.

‘There are five annual fairs held in Quin. They are held in January, February and March and on the 7th of July and one on the first of November. There is also a fair held in Spancilhill on the 24th of June.

The fair of Quin held on the 1st of November is the principal on. It is held on the street.  The tolls are collected by Denis Hassett.

In days gone by, fairs of Quin used to be very big.When Rory O ‘Moore and the Leinster chiefs rose in rebellion in 1641 it was first heard of at the fair of Quin.

From Eileen Markham as told by Mary O’ Malley, Feakle

Long ago The November Fair of Quin was one of the most famous Fairs in Ireland. While many came to buy and sell, greater numbers came to enjoy the fun ,and a good many came to take part in the faction fights that took place annually on November Day. At The November Fair of Quin then all past insults were remembered and often atoned for by sore heads, and not too rarely by the death of the supposed aggressor. They fought with long seasoned ash plants, for it was known that many a faction fighter had his ash plant for months “seasoning “in the chimney corner. Some fought with blackthorns with a large round knob ,and which were “toughened ” by age and often bore the blood of some unfortunate victim, who happened to insult somebody during the year or did some wrong to his neighbour or who may have been the victim of “spite “of long standing ,but the aggressor as well as the culprit came with a large faction ,so the odds were fairly even when the fight began, but as it progressed others joined in many of whom did not know the cause of the fight but joined in for the pure excitement of the moment and it was often that one there who had no interest in the fight came out the worst. Strange to say too, the most trivial things often started a most serious faction fight. A man named Andy Clune from Orda and his comrade Patsy Pewter from Kilcorran took off their coats at the Cross of Quin and trailed them on the road through the Fair,shouting at the same time defiance “That there was no man at the Fair of Quin would have the courage to step on their coats .One man however picked up courage to do so ,with the result that one of the most formidable faction fights that ever took place at the hair ,began and ended with many of the fighters having to spend long terms in Jail. However they came out heroes and were glad to be able to say that they took part in the great fight.

There is a field in Quin called the “Fair Green “where the fairs used to be held long ago. It is seldom used now. The fairs are held on the street now.

When a buyer comes to buy cattle from a farmer he says “How much for them” Then the farmer names his price, but they buyer may not be inclined to give it and starts reducing the price. After a long talk the farmer may sell the cattle.

When the farmer sells cattle he has to pay toll. He pays a shilling for every beast he sells.

From Aggie Clune as told by Corny Clune, Danganbrack.

The fairs used be held in Quin Spancilhill and Ardsollus. The old fairs are still held in Quin on the 7th of July and the first of November and in Spancilhill on the 23th and 24th of June. There is no fair held now in Ardsollus nor for the last sixty years. They say the building of the Railway put a stop to the fairs.

There is a special field in Quin and Spancilhill called the fair-green. There is money called toll on every beast by the owner to the toll collector. When the buyer is paying for the beasts he gets a small sum of money back from the seller which is called a luck-penny. When they are making the bargain the buyer spits on his hand and strikes the seller’s hand.

From Joseph Clune as told by Stephen Clune, Quin,

Long ago a fair was held in Quin on the 1st of November and is still held. Years ago this fair mainly of black cattle, used to gold for a week. This fair was so well known, that buyers came from, all over the country.

Long ago it was the scene of faction fights and even to the present day November fair never passes without a row. They used to have fifty tents in the fair-green selling liquor and food. The tolls are collected at the gate, when the cattle are coming out of the fair-green. The people give a luck penny when they sell a beast

Below are two famous cattle poems. The first in Irish,Bean na dTrí mBó is from the Middle Ages, while its celebrated translation, ‘Woman of Three Cows’ is by James Clarence Mangan from the nineteenth century.

As do bhólacht ná bí teann;

I have seen—and, here’s my hand to you, I only say what’s true—

A many a one with twice your stock not half so proud as you.

. Good luck to you, don’t scorn the poor, and don’t be their despiser,

For worldly wealth soon melts away, and cheats the very miser,

Then don’t be stiff, and don’t be proud, good Woman of Three Cows!

This article is intend only as a sampler. Much more can and should be written about the Quin fairs. We are anxious to develop a fuller Quin history and would welcome any help.