The Night of the Big Wind

The Feast of the Epiphany 1839 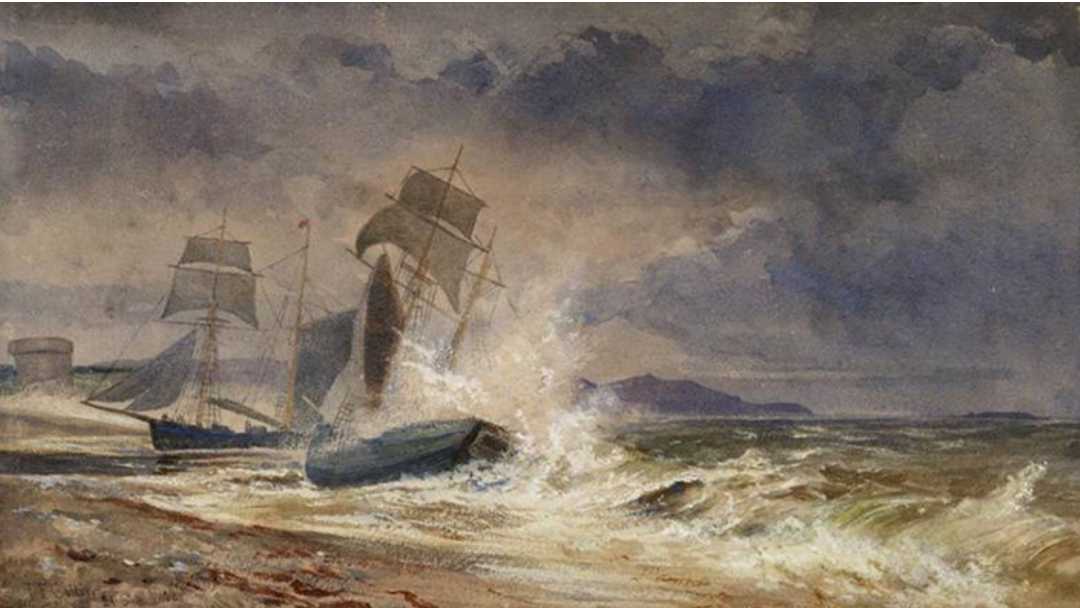 On Saturday, January 5th, 1839, heavy snow fell throughout Ireland. The next morning was completely calm and the sky was covered with motionless, dense cloud. As the morning progressed, the temperature rose well above the January norms. While children played in the snow outdoors, mothers and fathers were inside their homes preparing for the festivities of Nollaig na mBan or Little Christmas – the feast of the Epiphany.

At about three o’clock in the afternoon, it became unnaturally still. So calm that voices floated between farmhouses more than a mile apart. Something strange was happening, but no one knew exactly what.

The early snow melted. Unknown to all, a deep depression was forming in the north Atlantic. As the warm front gradually moved eastwards and rose higher in the atmosphere, it was replaced by a cold weather-band that brought high winds and heavy rain.

The rain began before noon in the west and spread very slowly eastwards. In County Mayo, the late afternoon turned chilly while the eastern part of the country continued to enjoy the unseasonably warm temperatures experienced in the west earlier that day. At dusk, wind speeds increased, it became much colder and alternate showers of rain and hail began to fall. By nine o’clock, the wind had reached gale force and continued to increase. By midnight it had reached hurricane force and remained at that level until five o’clock in the morning.

Along the western seaboard, people made their peace with God, convinced that the end of the world was at hand. The overwhelming chaos and terror of the storm was long remembered by those who experienced it. A rumbling noise, similar to thunder at a low volume, continued throughout the storm but increased in pitch as the gusts grew stronger. The wind extinguished lanterns and candles and it was impossible to see what was happening. Streaks of lightning occasionally illuminated an area or when the sky would clear for a brief moment and the aurora borealis could be seen lighting up the northern sky in a mantle of red.

It was a long fearful night, with people rushing from their devastated homes to huddle with neighbours, in churches or anywhere strong and standing. In the cities people congregated at municipal buildings for shelter, while others headed to the country to avoid flying debris.

On Monday, January 7th, the sun rose on a wasteland. Familiar objects were unrecognizable. Known landmarks were gone. People were dazed and exhausted from lack of sleep. Nothing was where it should be.

Tenant farmers were particularly hard hit. In the countryside, stacks of corn and hay were blown completely out of the haggard and were scattered across the fields. What was recovered had been drenched through, causing it to rot. This left farmers without winter feed for their livestock.

Boundary walls of drystone construction were blown down, allowing animals to stray and mix with other herds and flocks. High orchard walls on rural estates collapsed in long sections. Sheep on mountains were blown to their death or killed by loose stones tumbling down hillsides, depriving hill farmers of their chief source of income.

Sea water was carried miles inland by the force of the storm which flooded houses when it poured down chimneys. One of the most abiding memories of the night and its aftermath was the smell of salt that lingered in houses for weeks. Seaweed too was carried inland for great distances.

Everything was in complete disarray, with nothing where it should be. Thatched roofs had become airborne, taking with them people’s savings stored in the straw; slate roofs were ‘plucked clean like turkeys’; while roofs of lead were ‘rolled like ancient scrolls.’  Fish had been snatched from the sea and deposited miles inland; jackdaws, snipe, terns and plovers were piled in dead heaps, as if all seized by the same wind movement. One of the canals in Dublin was drained of water between the locks by a local whirlwind. Numerous church steeples and hundreds of chimneys were knocked over, hundreds of thousands of trees were levelled.

Ricks of hay dumped by the wind into the waters choked sections of the Shannon River. Conflagrations broke out all over, destroying hundreds of buildings – one hundred houses in Athlone, eighty-nine in Loughrea, sixty-three in Moate and so on across the country. Property destruction was universal.

When the storm finally abated, there was a palpable sense of relief. Those with homes offered space, food and heat to their neighbours. However, for the sick and elderly, theirs was still a long winter. A high mortality rate was noted in the weeks and months that followed.

Not surprisingly, the hurricane generated a mass of folklore.

There were people in every community who practiced weather forecasting using such factors as the lunar cycle, appearance of the sky and sea, wind direction, the behaviour of birds, animals, fish and insects and their own intuition – often with a remarkable degree of success. These amateur weather forecasters failed to predict the event, so people sought their explanations elsewhere.

The superstitious were quick to attribute the storm to the fairies. Traditionally, the 5th of January was the feast of St. Ceara of Kilkeary, when it was believed the fairies held a night of revelry. The fairies, they thought, were so unruly that the storm resulted. Others believed that on that night, all but a few of the fairies left Ireland, never to return.

The devout, noting that the storm occurred on the night of the Epiphany, saw it as of divine origin. All the more so since many Roman Catholics in Ireland believed that the 7th of January would be the Day of Judgement. The wrath of God was a favourite reason cited by newspaper correspondents of all religious persuasions.

The weather remained unsettled in the days after the Night of the Big Wind and occasionally the wind became gusty causing people to fear that the storm would return. In mid-January the aurora borealis reappeared, again stirring panic.

While most were suffering greatly, the wind blew favourably for some: merchants, carpenters, slaters, thatchers and builders in particular were busy renovating public buildings and the properties of the wealthy. The poor, who could not afford to hire such services, had to survive as best they could. The tempest happened in an era before the introduction of government relief measures and widespread insurance. The relationship between landlord and tenant dictated that the tenant made good damage caused by storms. What little reserve of cash was held by the poor was used in rebuilding and restocking. In many cases houses were re-built in sheltered locations at the bottom of hills. For many years, until the advent of sturdier building materials, shelter from the wind was a primary factor in choosing a house-site.

The following is a brief newspaper account from the time:

‘The storm with which this city was visited on Sunday night was one of the most violent which has blown from the face of Heaven within the memory of the oldest inhabitants. ‬At an early hour on Sunday evening the wind freshened to a degree that seemed to promise a rough night, ‬and about half-past ten it rose into a high gale, ‬which continued to increase in fury until shortly after midnight, ‬when it blew a most fearful and destructive tempest. ‬Not a soul dare venture into the streets; ‬the lamps were, ‬without almost any exception, ‬extinguished; ‬and amidst the roaring of the hurricane, ‬which threatened to sweep every obstacle before it from the surface of the earth, ‬the pealing of fire-bells ‬– ‬the sounds of falling chimneys ‬– ‬windows breaking, ‬and slates and tiles flying through the streets, ‬were fearfully audible; ‬and sometimes the still more dreadful rocking walls and falling roofs threatened them momentarily with destruction. ‬‬‬‬‬‬‬‬‬‬‬‬‬‬‬‬‬‬‬‬‬‬‬‬‬‬‬‬‬‬‬‬‬‬‬‬‬‬‬‬‬‬‬‬‬‬‬‬‬‬‬‬‬‬‬‬‬‬‬‬‬‬‬‬‬‬‬‬‬‬‬‬‬‬‬‬

In the streets, ‬however, ‬it was impossible to tell in what direction the storm was, ‬for it came in sudden gusts, ‬sweeping sometimes up, ‬and sometimes down, ‬the street, ‬and occasionally two contrary blasts meeting and forming a whirlwind, ‬which made the strongest houses tremble and rock to their foundations. ‬At intervals dense clouds obscured the sky, ‬and added to the horror of the scene by the gloomy darkness which they produced; ‬but when they were driven by, ‬the heavens did not appear less ominous, ‬for the Aurora Borealis burned brightly a great portion of the night, ‬mantling the hemisphere with sheets of red, ‬and corresponding well with the lurid gleams which ascended to the zenith from the flames of burning houses that the tempest threatened to fan into a general conflagration. ‬After four o’clock the storm sensibly diminished,  ‬but continued to rage with considerable fury until daybreak, ‬when it sank back into a steady and heavy gale from the S.W. ‬that continued throughout the remainder of the day’.‬‬‬‬‬‬‬‬‬‬‬‬‬‬‬‬‬‬‬‬‬‬‬‬‬‬‬‬‬‬‬‬‬‬‬‬‬‬‬‬‬

Given the storm’s ferocity, the death toll was miraculously low. Perhaps 250-300 people lost their lives, most at sea in sunken ships. While there were many lucky escapes, famine followed seven years later. It almost completely wiped out the social class that suffered the most on that fateful night. As the century progressed, the Night of the Big Wind became a milestone in time. Events were referred to as happening before or after it.

In 1909, old age pensions were introduced in Ireland that entitled people over seventy an allowance of five shillings per week from the State. For those who had no documentary proof of their ages, which was very common, pensions were granted if they could remember the night of the Big Wind.

Taken from my book ‘An Nollaig – An Irish Christmas Reader’