The Reminiscences Of An Irish Land Agent

Departing a little from our usual format, where the focus has been on stories of Quin, Clooney, Maghera and the surrounding area, the following is taken from a 1904 book by Samuel Hussey. Mr. Hussey was a land agent in South Kerry in the late nineteenth century. As we know from our own reading, there were few forms of humanity considered lower than that of the Irish land agent. However, Hussey was a raconteur who freely moved amongst the peasant class and counted priests amongst his friends. He is still remembered in Kerry for his lively personality and his turn of phrase. This is clear in these extracts from his personal reminiscences. While the comments are largely about Kerry, they could apply to any county at the time.

THE REMINISCENCES OF AN IRISH LAND AGENT, BEING THOSE OF S. M. HUSSEY 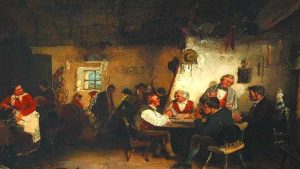 In the worst time a moonlighter slept for a fortnight close to the house of an Irish landlord, who was well aware that he was there for the express purpose of shooting him, but he never even attempted it.

‘Time after time I lay in a ditch to have a go at him, but he would ride by, looking for all the world as if he would shoot a flea off the tail of a shnipe, so that, with all the whiskey in the world to help me, I dared not do it,’ was his explanation – before he left for America’.

Did you never hear the parish priest’s sermon?

On one occasion a Killorglin publican was in jail, and his father asked for an interview because he wanted the recipe for manufacturing the special whiskey for Puck Fair. It has been a constant practice to prepare this blend, but the whiskey does not keep many days, as may be gathered from the recipe, which the prisoner without hesitation dictated to his parent: —

A gallon of fresh, fiery whiskey. A pint of rum. A pint of methylated spirit. Two ounces of corrosive sublimate. Three gallons of water.

An Irishman’s constitution must be tougher than that of an ostrich to enable him to consume much of the filthy poison.

Temperance orators are welcome to make what use they like of the recipe of this awful decoction, annually sold to a confiding population.

It is not considered etiquette to come out of Killorglin sober on Puck Fair; and, judging by the state of the people in the vicinity in the evening, this social custom is rigidly observed.

They are wonderfully particular in Kerry in attending to exactly what is congenial to them, and if it were not for the thickness of their heads a good many lives would be lost.

The parish priest of Dingle recently stated in court that in a population of seventeen hundred there were over fifty licensed houses, and he rightly declared that all dealings in licences should for the present be only by transfer, and that for five years at least no new licences should be granted.

The argument so often heard against stopping licences is that then more illicit drinking will ensue, but this does not convince me that the redundant licences should be renewed. My remedy would be to increase all renewals of licences to fifty pounds apiece, and to apply the difference as compensation to unrenewed licences. If a man fits up his house as a shebeen, and has conducted it tolerably, he ought toreceive just compensation when his licence is cancelled owing to there being too many in a district.

There was a gauger, (An excise man regulating alcohol measures) in a central county in Ireland, killed by a blow on the head from a stick.

The man who struck him, in his defence, stated: —

‘I did not hit him a very hard blow, and why the devil did the Government make a gauger of a man that had a head no thicker than an egg-shell? ‘

One redeeming feature in the liquor traffic is the increasing consumption of porter, for that at least has some nourishment in it, and is reasonably wholesome, whereas the whisky is vilely adulterated, not only by the publicans before it reaches the consumer, but also in some of the factories.

Old David Burus, the steward at Ardrum, County Cork, was a great character who had got inextricably confused between the Council of Trent and the Trant family in the vicinity, and no amount of explanation could ever enlighten him.

Directly he had begun to be jovial, he used to say: —

‘My blessing on Councillor Trent, who put a fast on meat, but not on drink.’

And he proved the devoutness of his gratitude by conscientiously getting drunk every Friday.

On one occasion I remonstrated with him on the amount of whiskey he drank,

‘I did drink a great deal of whiskey, and I would have drunk more,’ was his reply, ‘if I had known it was going to be as dear as it is now.’

There was a farmer at Kanturk railway station who confided to the stationmaster that he himself on the previous evening had been as drunk as the very devil.

A parson on the platform, overhearing him, said: —

‘You make a mistake, my friend, the devil does not drink. He keeps his head cool for the express purpose of watching such as you.’

‘You seem to be very well acquainted with the respected gentleman’s habits, your riverince.’

A man who lived in Cork was notorious for being always behind time for everything. He knew his failing, and was rather touchy about it. One night, stumbling out of a whiskey shop, he lurched into a yard, fell against a door, which gave way, and finished his slumbers peacefully in the shed, which was the storehouse of an undertaker. In the morning he awoke, rubbed his eyes in astonishment at the strange surroundings amid which he found himself, and after recollecting his own pet proclivity, as he ruefully surveyed all the empty coffins, ejaculated: — ‘ Just my usual luck. Late for the Resurrection.’

Which recalls another tale: —

‘I well remember when I was with Bogue in Scotland, that one night he had a fellow-farmer of the very best type to dine with him, and about ten o’clock, with much difficulty, my man and I hoisted him into the saddle. An hour afterwards we heard a knock at the door, and a voice rather quaveringly inquired: — ‘Pleash, can you tell me the way to X., I have lost my way?’

THE REMINISCENCES OF AN IRISH LAND AGENT, BEING THOSE OF S. M. HUSSEY