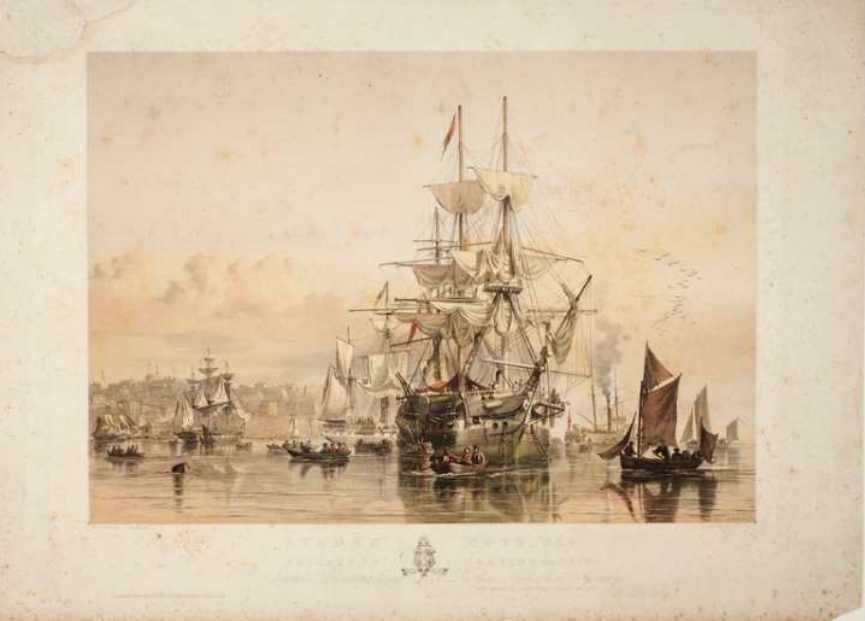 On the 28th of October 1849 the ‘Thomas Arbuthnot’, a fast sailing convict ship named after Major General Sir Thomas Arbuthnot, who was in active service in Ireland in the 1830’s, set sail from Plymouth, England for Australia. On board were 81 Clare girls between the ages of 15 and 18 from workhouses in Ennis, Scarriff and Ennistymon. Shipped over from Ireland, they were joining 113 other girls from workhouses in Galway and Kerry for the three-month voyage to New South Wales.

The girls were bound for Australia as part of what was later known as the Earl Grey Scheme, a resettlement program masterminded by Henry Grey, 3rd Earl Grey, who was Secretary of State for the Colonies between 1846 and 1852. The scheme served two purposes – to clear out the young female paupers from Ireland’s overcrowded workhouses and to meet Australia’s need for female labourers and future mothers, in what at the time, was a male-dominated colony.

The scheme was considered inappropriate, even brutish, from the outset and only lasted three years. However in that time, 4,114 young Irish girls from the 32 countries, some as young as 14, were transported to Australia. 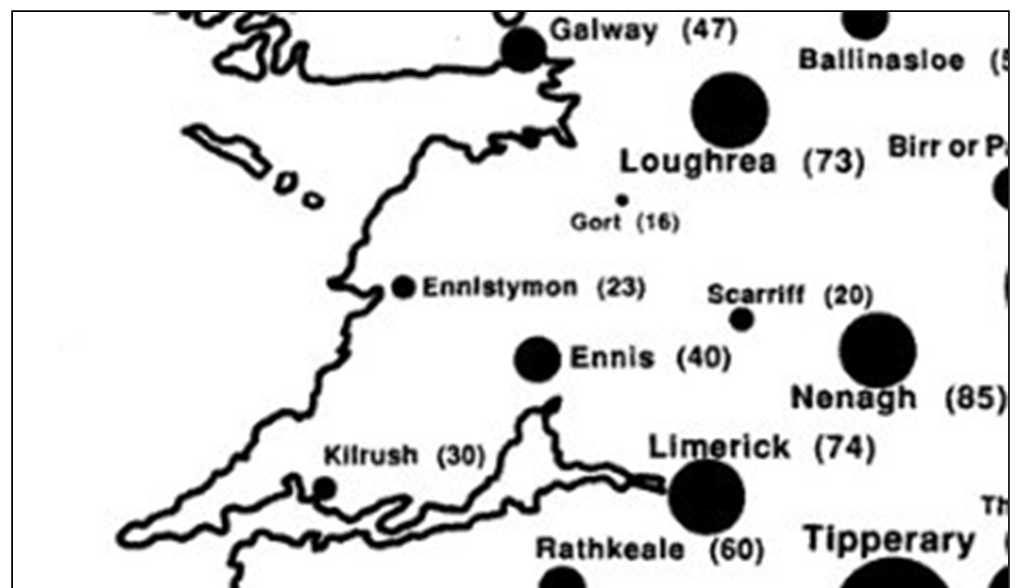 A total of 113 girls were taken from four workhouses in Clare under the Earl Grey scheme.
(Figures above). 1

Before departing, the workhouse officers were obliged to seek character references, carry out complete medical examinations and to have chosen suitable young women for the voyage. The Poor Law guardians provided an outfit of clothing to girls who indicated they were willing to take advantage of the passages offered and a ‘sea chest’ for personal items was provided. Following inspection and the signing of a consent form by the Poor Law guardians and presumably the girl herself, the girls’ passage to the port of departure in Ireland and on to Plymouth was paid by the Poor Law union. This first section of the journey was regarded as the worst part of the emigrant experience, spurring four parliamentary enquiries between 1848 and 1854 to investigate the often frightful conditions encountered by impoverished passengers crossing from Ireland to England. Orphan emigrants arriving at Plymouth in late October 1849 “presented a forlorn appearance, after the discomforts of their preparatory voyage from Dublin, on board a crowded steamer.”

The girls aboard the Thomas Arbuthnot were fortunate to be under the care of surgeon Charles Strutt. His duty was to supervise the sanitary regime on board, oversee the distribution and cooking of rations, attend to the sick, and maintain control of discipline and the moral tone on board. Strutt, as Surgeon General of the Thomas Arbuthnot, made sure the girls were given hot baths, haircuts and new clothes before the journey. He maintained his care throughout the voyage and on arrival in Australia.

In 1995 following a visit to Australia by President Mary Robinson, who exhorted the Australian people to remember their past Irish immigrants, an initiative by Irish-Australian communities led to the erection of a memorial wall in Sydney’s historic Hyde Park Barracks offering a simple but symbolically powerful monument to the thousands of orphan girls who came to Australia as part of the resettlement policy after the Irish Famine.

As part of the memorial wall there are the names of 420 names etched in glass panels, representing the 4,114 workhouse emigrants. The following Clare girls are recorded (as written): 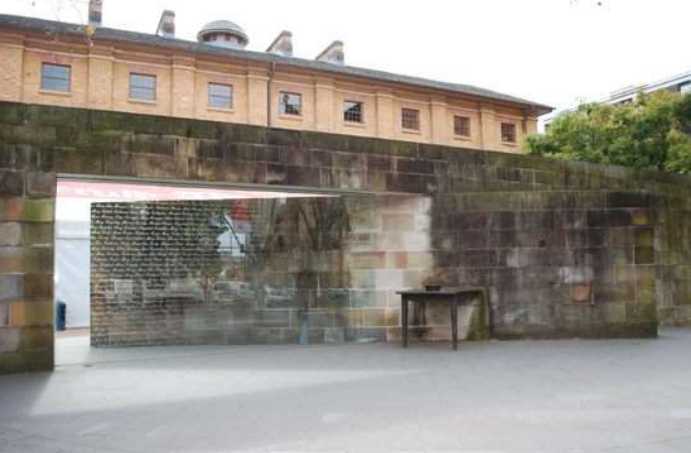 Historian and genealogist Dr Perry McIntyre said the Irish community was the driving force behind building the monument in 1995. Dr. McIntyre later wrote: “We are in contact with at least several thousand descendants and my estimation is that there would be at least 500,000 people descended from these 4,114 girls, even if they don’t know about this aspect of their genealogy.” 2

On February 3, 1850 the Thomas Arbuthnot came to anchor off Garden Island, Sydney. On February 8th, the workhouse girls of Clare, Kerry and Galway walked the few hundred yards from Circular Quay to the Female Immigrant Depot at Hyde Park. From the depot on Monday the 18th, 105 girls from the ship set off for the small country settlement of Yass, approximately 300 kilometers southwest of Sydney. Here they were helped to find employment and successfully settled into such places as Tumut, Boorowa, Jugiong, Gundagai and Binalong.3

Contrary to popular understanding, the emigrant ships were not full of illiterate feral females, as so often reported by the local Sydney press. In the first instance the primary language of the majority of the girls was Irish. From surveys of well over half the twenty emigrant ships, twenty-five percent of those on board could read and write, forty-two percent were illiterate, and the remainder could read only. This does, nonetheless, debunk the idea that they were all illiterate. Among the passengers, seventy-two percent are recorded as “true” orphans with both parents dead, keeping in mind that “orphan” in the nineteenth century could mean that one parent was still alive, and this was the case for almost twenty percent of the Sydney arrivals with just over four hundred mothers and 135 fathers indicated on the shipping list as still living. Thirty-six workhouse women who travelled to Sydney indicated that both parents were still alive.4 It was not tragedy but poverty that often instigated their voyage.

No doubt many of the girls had hoped to return to Ireland someday. (‘Bás in Éirinn’ – ‘to die in Ireland’ was a popular Irish-Australian toast). For most, this was not to be. The girls’ descendants and those of the other 4,000 orphans sent to the colonies over 170 years ago now number in the many, many thousands, leaving an indelible mark on the Australian continent.

One side-story, an addendum if you will, is found in Surgeon Strutt’s journal. He wrote that on Christmas Eve 1839 as the Thomas Arbuthnot rounded the Cape of Good Hope and was entering the southern ocean, the girls felt they were losing their last tenuous links with Ireland. Huddled in small groups they began a spontaneous caoin, a spiritual lament for their homeland. Reid, author of the Thomas Arbuthnot voyage described it elegantly as ‘an unexpected outpouring of the Celtic soul’. Ag caoineadh or keening became an integral part of Irish- Australian wake rituals for many years.

Quin village rightly marks the Kalgoorlie gold find by Paddy Hannan in 1892. In some way, wouldn’t it be appropriate to remember the young girls from Clare and elsewhere, who formed part of the Earl Grey Scheme and became the mothers of a nation, 13,000 nautical miles from home?.

3 Richard Reid, A Decent Set Of Girls: The Irish Famine Orphans Of The Thomas Arbuthnot 1849-1850,