Most nineteenth century Clare Catholics expected to find Heaven after death if very blessed, Hell if very bad, or Purgatory if somewhere in between. They anticipated that their bodies would be taken from their homes to be buried with kin in consecrated ground after their wake. Most times, this is exactly how it happened.

However there were some dead who did not qualify for any of the three main categories of the afterlife. These included strangers (perhaps washed up on the seashore) about whom nothing was known. More common were suicides and unbaptised children (Leanaí gan baisteadh), “a sad association…of those who had known nothing and those who had known too much of life” as folklorist Robin Flower commented on a child burial in the Great Blasket island.[1]Child deaths were the most numerous and the most difficult to deal with. There is strong evidence in the archaeology to show that child burials had been treated separately in many societies since prehistoric times.[2] For unbaptised children, since the Council of Trent in 1563 until the Second Vatican Council (1962-65), it was considered that stillborn babies or unbaptised neonates that died soon after birth could not go to Heaven.[3]While it was recognized that these children had committed no sin, they had not earned salvation through baptism and so could not be treated as members of the Church. The Catholic Church’s response to this dilemma was the notion of limbo-a state which offered respite but not in the presence of God; a sad shadowy place described in Irish as dorchadas gan phian – darkness without pain.[4] They predominantly date from the post-medieval period (mid-sixteenth century) to the mid-twentieth century, though a number of medieval examples have also been recorded.

Furthermore ‘the theologically liminal state of these infant souls was mirrored in the geographical liminality of their bodies.’[5]Stillborn children and suicides were considered ineligible for burial in consecrated ground. They were instead interred in separate ‘children’s burial grounds’ called cillíní or cealluraigh (hence Cealluragh townlands in the Bunratty baronies). These were anglicized as ‘Kyles’ or ‘Kyleens’ in parts of Clare. Because of high infant mortality rates in the nineteenth century they were frequently in use.

The cillíní were chosen carefully. In an article on children’s burials in Clare their locations were given as ‘near Holy Wells, others are on the borders of townlands, or in places of mystical significance, the remainder are at crossing points, near megalithic tombs or in positions of importance.’ [6] As well as being ‘physically and spiritually liminal in the landscape…the host site is an important determinant, enhancing the ambiguity and otherness of the burials.’[7] It was also concluded that ‘the type of burial deposits does not encourage visitations as an active part of remembrance.’[8]

Folklore tells us that child burials at cillíní were performed quickly and discreetly, often undertaken at night by the father, with minimum ceremony and without formal community acknowledgement, such as a wake.[9] However the care taken with grave markers and recent excavation of grave goods such as shrouds, a crucifix, pins, and fabric indicate that care and religious observance were fulfilled at these burials.[10]

Holy wells and cillíní shared an existence exterior to the official church. Their functions were to provide a service to people who sought sense and consolation in the world. With the non-availability of the parish graveyard in the face of strict Catholic doctrine and in response to the needs of the grieving family, the community would bury their dead close, in what to them was their sacred ground. Often when the official church was out of bounds, an abandoned earlier church would suffice. Many cillíns are situated in or near church ruins. For example a consecrated graveyard beside the old church of Shankill,Dangan that had been abandoned was subsequently used as a cillín. 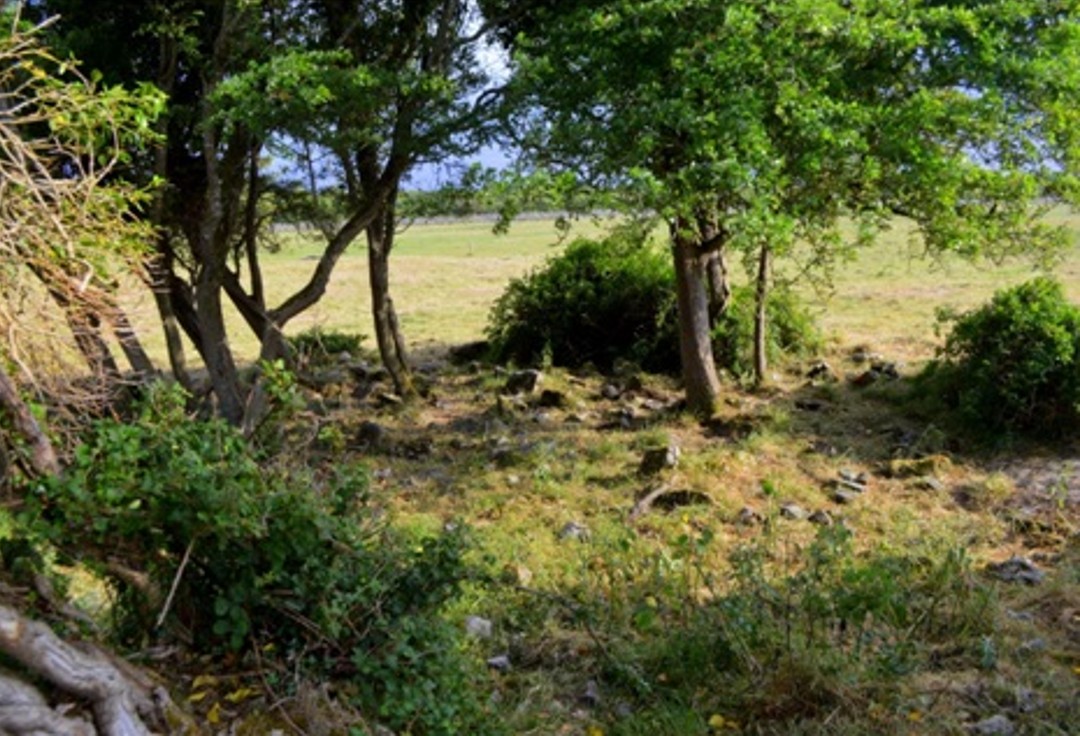 Ballymacloon East, Quin. Remains of a Holy Well and cillín. 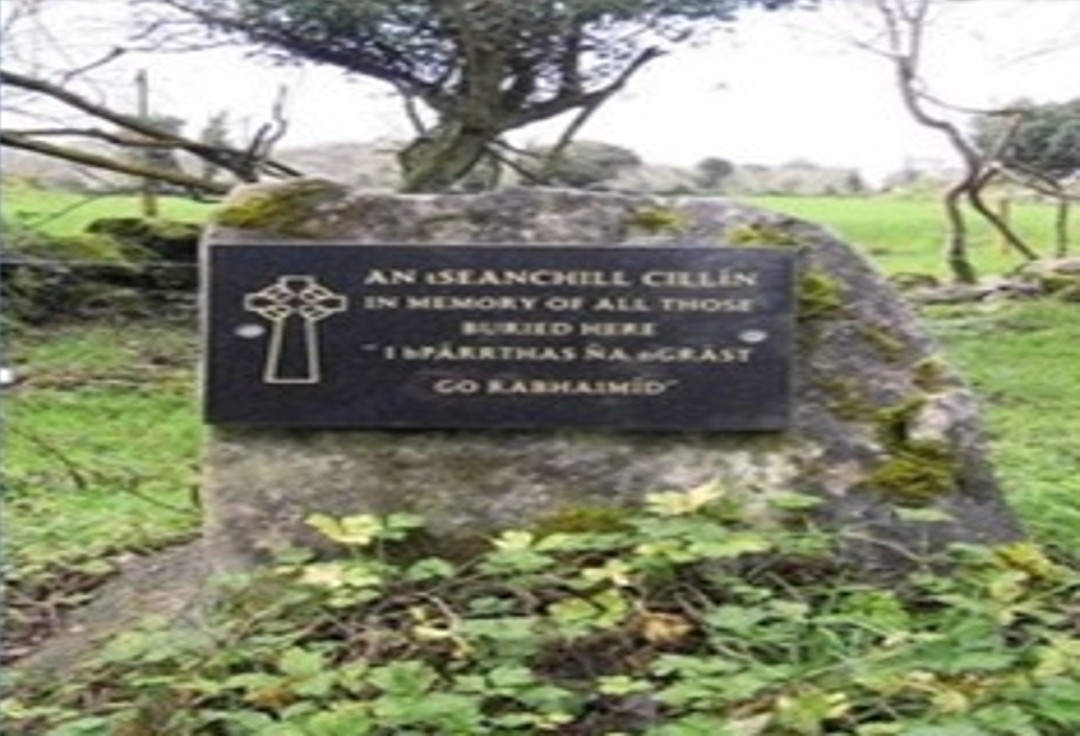 Also worth noting are the number of cillíns found in ring forts, long considered the abode of the fairies. The ring forts at Tullycrine and Furoor in West Clare are typical examples. The majority of local people up to at least the mid-nineteenth century had a firm belief in the Aes Sidhe or fairy world and assistance was often sought from there. With suicides or strangers ‘it was also a common practice to bury such people in places associated with the fairies or the good people: liosanna and ráthanna….Single instances also exist of burial underneath a lone bush or burial beside holy wells.’[11]

While there was a perceived prohibition of frequent visits to the infant graves in the cillín, this may have been overcome by time spent at a nearby holy well as a substitute act of remembrance. For example at Ballymacloon East, the Holy Well and the cillín are on the same site. The presence of a quartz or quartzite stone, for centuries associated with interments, is found at holy wells. This may have been left as a token during a ritual round/turas performed at the well while invoking its patron saint for the soul of a cherished baby in the nearby burial ground.In a study in the parish of Ballynacally/Lissycasey, west Clare by Mary Hester, of seven cillíní visited, four have a nearby well (60 percent).

There are the remains of 136 cillíní in county Clare – a remarkable number when compared with most counties. The national average, excluding the four most numerous counties is about 11 cillíní per county, with most counties having less than five children’s burial grounds. It raises the question that if the cillíní met an important psychological and spiritual need for some, how did counties with practically no children’s graveyards cope with their unbaptised dead?

The refusal to place unbaptised infants in consecrated ground was an appalling tragedy for a deeply religious people. The use of cillíns mitigated the pain a little and the visitation to a nearby Holy Well allowed some level of closure. The use of cillíns continued up to the 1940’s and in some instances, the 1950’s. I have met people who told me of a tiny sister or brother buried in a cillín. Recently in many parishes, the cillíns have been embraced and reintroduced into the prayer community. Perhaps the same should be considered for Quin?

Please note:  Much of the information in this article comes from Chapter Three of my book ‘The Holy Wells of County Clare’ (2015).

[3] ‘So that infants, unless they pass the number of believers through the sacrament which was divinely instituted for the purpose (Baptism), will undoubtedly remain in darkness’in The Catholic Encyclopedia: An International Work of Reference on the Constitution, Doctrine, Discipline, and History of the Catholic Church, Book 1, Chapter 35, (New York, 1912), p. 312.

[9]D. Sugrue, An examination of Aspects of Tradition relating to some Ceallúnaigh in Uibh Rathach, unpublished M.A. thesis, UCC, (1993).